Shields and Rieger Named AU Athletes of the Week 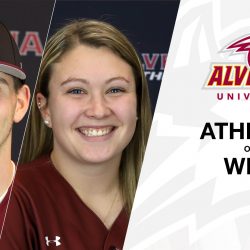 (April 16, 2018) – Softball sophomore Riley Shields and Baseball junior Colin Rieger were named Alvernia Athletes of the Week for the period of 4/9 – 4/15.

Shields was dominant in the circle for Alvernia posting a 0.80 ERA while going 3-1 with two saves in a 5-1 week, throwing complete games wins in the openers of all three doubleheaders then earned saves in game two at Neumann and at Widener.

Shields was also named MAC Commonwealth Pitcher of the Week for her outstanding mound performances.

Her only loss came on an unearned run at Albright, where she rung up 14 strikeouts in 26 and a third innings and surrendered just three earned runs. Shields also batted .429 (9-for-21) with four runs scored and five RBIs for the Golden Wolves. Three of her nine hits were doubles. She went 2-for-8 with two runs and an RBI in a sweep at Neumann, then ended the week going 6-for-6 with two runs scored, two RBIs, a double, and two walks.