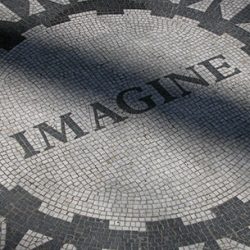 The Imagine Mosaic at Strawberry Field in Central Park, dedicated to the late John Lennon, who lived across the street in the Dakota Apartments at Central Park West and 72nd Street in New York City.
You May Also Like
Facebook Twitter Pinterest Email
Share

Some 20 students enrolled in the Penn State Berks Beatles honors course turned into day trippers on Sunday, April 8, 2018, traveling to New York City for a walking tour of Fab Four historic points here, there and everywhere, a presentation by one of the world’s leading Beatle experts and enthusiasts, and a visit to the New York Public Library’s current 1960s U.S. history and culture exhibit.

Taught since 2016 by Dr. Thomas Lynn, associate professor of English, INART 205: Introducing the Beatles offers undergraduates a detailed overview of the music and lives of John Lennon, Paul McCartney, George Harrison, and Ringo Starr, and their impact on the world.

The Fab 4 NYC Walking Tour, led by native New Yorker Susan Ryan who has been a Beatles expert for 40 years and a published writer of fiction, features, news, reviews and editorials about the group, covered several locations including Radio City Music Hall, Warwick Hotels and Resorts and The Plaza New York, Carnegie Hall, the Dakota Apartments, Strawberry Field and Tavern on the Green–both located in Central Park, the Ed Sullivan Theater and the Apple Records offices in Manhattan.

The Beatles may not have enjoyed touring as much as the students enjoyed walking in their footsteps. According to Ringo, “Touring was murder. We hardly saw any of America because we had to stay inside hotel rooms all of the time (including at the Plaza and at the Warwick). We were always dead beat.”

The touring Penn State Berks students also were treated to a luncheon presentation by Dr. Kenneth Womack, the recognized Beatles expert who helped Lynn design his course and who wrote the textbook, Long and Winding Roads: The Evolving Artistry of the Beatles in 2007.

Currently dean of the Wayne D. McMurray School of Humanities and Social Sciences at Monmouth University, West Long Branch, N.J., Womack brought the Beatles to Penn State and its Commonwealth campuses during 2013 and 2014 as the Penn State Laureate. He visited Lynn’s class in 2016.

Womack, who also accompanied the walking tour, recently completed a two-volume book on the life of George Martin, the Beatles producer, and presented a lecture about that book at Penn State Berks, also in 2016. He is completing two additional works, one on Abbey Road and another on Lennon’s life.

The New York Library exhibit, “Remembering the 60s: You Say You Want a Revolution,” featured items from its collection related to literature, music, the Vietnam War, women’s liberation, sexuality and gender, civil rights, Woodstock and the communal life.

Lynn said that Womack remains instrumental in expanding the world of the Beatles, who represent a fantastic period in American history, at Penn State Berks. “It has been a wonderful course to teach, and–not as some students thought–an easy one lacking academic rigor.

“As a teacher of literature, asking students to discuss their responses to music (not just words) has been challenging. It’s not the same as asking them about a book they read. But it has proven to be rewarding for all involved,” Lynn explained.

The course has attracted as many as 70 students; the current honors version has 19. Instructor Dara McCue taught the course with Lynn until retiring last summer.