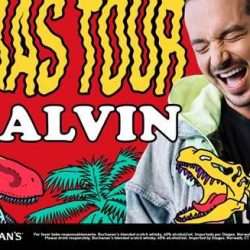 Highly-Anticipated New Album VIBRAS Will Be Released May 25

LOS ANGELES – Multi-platinum, award-winning Colombian superstar and one of the hottest acts in Latin music, J Balvin, is inviting North American fans to vibe with him this fall on his newly revealed Vibras Tour Powered by Buchanan’s Whisky. The news comes on the heels of the recent announcement that his highly-anticipated new album VIBRAS will be released May 25, and is available for presale now.

The 27-date tour produced by Live Nation kicks off September 19 in Fresno, CA and will make stops in Los Angeles, New York, Miami, Chicago, Las Vegas, Houston, and more. The outing will wrap on October 28 in Miami, FL. Citi® is the official presale credit card of the ‘Vibras Tour Powered by Buchanan’s Whisky’ As such, Citi cardmembers will have access to purchase presale tickets beginning Tuesday, April 24 at 10am local time, until Thursday, April 26 at 10pm local time through Citi’s Private Pass® program. For complete presale details visit www.citiprivatepass.com. Tickets will go on sale to the general public beginning Friday, April 27 at 10am local time at LiveNation.com.

J Balvin has had a phenomenal year from being one of the most-listened to global artists across YouTube and Spotify, to having back-to-back #1 singles with “Mi Gente” and “Machika.”As one of the music world’s most in-demand collaborators, Balvin has hit songs with Beyoncé, Cardi B, Justin Bieber, Pharrell Williams, Camila Cabello, Nicky Jam, Bad Bunny, Liam Payne and many more – making the Vibras Tour Powered by Buchanan’s Whisky a can’t miss event for fans ready to hear all of their favorite songs live.

Buchanan’s Whisky continues to be a proud supporter of Latin music through their ongoing partnership with J Balvin for the brand’s Es Nuestro Momento (It’s Our Time) campaign, which celebrates the positive influence Latinos have on mass culture. Building off the success of the Energía tour, Buchanan’s Whisky is thrilled to be joining J Balvin on the road for the second consecutive year to toast the greatness of the Latin community.

Joining as the official and exclusive automotive sponsor of the tour, Toyota is proud to partner with J Balvin for the second time in his impressive journey.  After his first successful U.S. tour, “Mi Familia”, Toyota continues to celebrate J Balvin’s rise to stardom and looks to connect music lovers and fans with this sensational tour through a combination of onsite and social elements that give them a front row seat to all the musical vibes.

Hailing from Medellín, Colombia, José Álvaro Osorio Balvin – better known to a legion of global fans as J BALVIN – has been praised by Billboard as “the biggest breakout act Latin music has seen in many years.” With a distinctive style all his own that pays reverence to the first-wave of Reggaeton stars from Puerto Rico, but fused with additional Colombian and mainstream hip-hop rhythms, more seductive than boastful lyrics, and a strong passion for fashion, J Balvin has become the undeniable leader of a second-generation Reggaeton revolution propelling Urban music back to the forefront of Latin music worldwide.

Between his game-changing major-label debut album LA FAMILA, global smash hit successor ENERGIA and recent landmark single s such as Mi Gente, and Machika,, J Balvin has quickly notched eight #1 Latin singles, 60 million social media followers, NINE BILLION Total YouTube Views, and is the only Latin artist included in Rolling Stone’s recent spotlight of the “New Classics” – “20 creative visionaires… who refuse to be contained by the rules of the past as they define the territory of the future.”