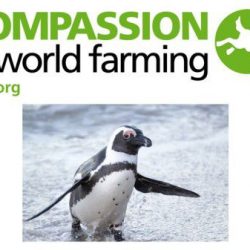 African penguins may face extinction in the next 15 years if we don’t stop plundering their food to fuel factory farming, warns Compassion in World Farming on World Penguin Day (Wed 25th April, 2018).

The penguins’ primary source of food is small fish, which are being sucked from our oceans on a massive scale and ground into ‘fishmeal’ to feed farmed salmon, pigs and chickens. Their plight is detailed in a new paperback, Dead Zone: Where the Wild Things Were, writtenby Compassion in World Farming CEO and naturalist, Philip Lymbery.

To coincide with World Penguin Day, Compassion in World Farming has launched a new video about the plight of the African penguin, which can be viewed here. It was filmed at Boulders Beach, on South Africa’s Cape Peninsula, a world-renowned spot for African penguins.

Compassion’s CEO, Philip Lymbery,author of Dead Zone: Where the Wild Things Were,says: “We must fix our broken food systems to end this senseless destruction and build a more sustainable future, before it’s too late.

“Penguins are one of the most popular species on our planet and we’re in serious danger of losing them unless we act now. If we continue to plunder small fish to turn into fishmeal for factory farmed animals we risk them disappearing forever.

“In the last 40 years, the total number of wild mammals, birds, reptiles, amphibians and fish worldwide has halved. It’s a shocking statistic and even more shocking to realise that it’s the food on our plate that is responsible for two-thirds of this wildlife loss.

“Demand for cheap meat is driving this problem so we can all make a difference three times a day by choosing to eat less and better meat such as pasture-fed, free- range and organic.”

Almost one-fifth of all the marine fish catch globally is turned into fishmeal, with much of it going to feed industrially reared farm animals in Europe and China. The UK alone imports up to 100,000 tonnes of fishmeal a year.

Dr Lorien Pichegru, a leading marine biologist based at the Institute of African Ornithology, fears that penguins could suffer the same fate as the dodo.

“Over fishing is a huge concern. Both fishermen and penguins are struggling because the fish population is also declining. It’s very worrying.”

Her team fitted tracking devices to penguins and noted that overfishing was causing them to swim further in search of food, affecting breeding rates. Despite efforts by conservationists to save them, numbers continue to decline.

Louise van der Merwe, Compassion in World Farming’s South African representative says: “The African Penguin is South Africa’s most rapidly declining bird and is listed as ‘Endangered’ on the IUCN Red List of Threatened Species. Now the H5N8 strain of avian influenza has added a further challenge to the Boulders Beach colony. The very survival of the African Penguin depends on us understanding the overwhelming impact on them of feeding fish to land-bound factory farmed animals like pigs and chickens so that we, in turn, can eat them cheaply.”

Experts estimate that the breeding population in South Africa has experienced a 95% decline in 6 years from 69 000 pairs in 2001 to 20 000 pairs in 2011. As a result it’s projected that the African penguin may become extinct within the next 15 years.

For more information about the links between wildlife extinctions and factory farming visit www.ciwf.org or www.philiplymbery.com/books