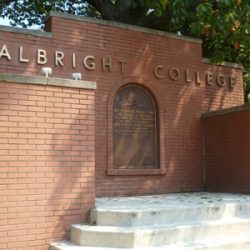 Reading, Pa. – The Edwin & Alma N. ’51 Lakin Holocaust Resource Center at Albright College presents the 14th annual Richard J. Yashek Memorial Lecture on Wednesday, May 2, at 7:30 p.m., in Albright’s Memorial Chapel. It is free and open to the public.

The lecture, “Not Your Father’s Antisemitism,” will feature Michael Berenbaum, Ph.D., the director of the Sigi Ziering Institute: Exploring the Ethical and Religious Implications of the Holocaust and a professor of Jewish Studies at American Jewish University in Los Angeles.

Why is antisemitism in the 21st century different from Nazi antisemitism or traditional antisemitism? Is the American Jewish community fighting the wrong battles? Join us and learn why those who refight the last war often lose the next one.

Berenbaum served as project director overseeing the creation of the United States Holocaust Memorial Museum, was the first director of its Research Institute, and was president and CEO of The Survivors of the Shoah Visual History Foundation. The author and editor of 20 books, he was also managing editor of the second edition of the Encyclopedia Judaica, a 22-volume body of work that won the Dartmouth Medal of the American Library Association as the best reference work of the year.

Berenbaum just completed work on an exhibition at the National Underground Railroad Freedom Center in Cincinnati that opened to coincide with the 70th anniversary of the liberation of Auschwitz. He is also developing the content for interactive programs and an expanded website for the Holocaust Memorial Miami Beach and leading the development of an interactive online Holocaust and Jewish Identity curriculum with the Coalition for Initiatives in Jewish Education and the USC Shoah Foundation Institute.

His work in film includes serving as executive producer, historical advisor, consultant, interviewee and producer to more than 20 films, including three Academy Award winners, One Survivor Remembers: The Gerda Weissman Klein Story; The Last Days; and Into the Arms of Strangers: The Story of the Kindertransport.

Memorial Chapel is located on the Albright campus at 13th and Bern streets, Reading.