Herbeins Receive Thun Award for Commitment to Community and Philanthropy 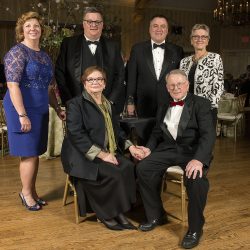 In honor of their unwavering commitment to improving the quality of life for others, Berks County natives Carl D. and Kathleen D. Herbein were presented with the 2018 Thun Award at a private ceremony on April 28.

Berks County Community Foundation, in partnership with Fulton Bank, held the annual Celebration of Giving at the Berkshire Country Club to thank the Herbeins for their enduring support of numerous Berks County nonprofits and institutions.

The Thun Award is presented to Berks County residents who generously contribute improvements to the quality of life in the community, said P. Sue Perrotty, Community Foundation board chair.

“The Herbeins’ leadership in our community has been extraordinary,” said Michele Richards, Fulton Bank’s Senior Vice President and Market Leader. “Carl and Kathy embody the leadership and love for this community that is found in all of the recipients of the Thun Award.”

Along with the award, the Herbeins were given discretion to distribute a $5,000 cash grant from the Thun Award Fund. The Community Foundation administers the fund, which each year provides a grant to an organization chosen by the Thun Award recipients.

This year, the Herbeins chose to award the grant to Alvernia University’s Reading Collegiate Scholars Program.

The Holleran Center operates the College Readiness Component of the Reading Collegiate Scholars Program, using work study students at Alvernia as mentors and tutors for high school students in Reading, while introducing those students to the possibility of attending college.

The O’Pake Institute for Ethics, Leadership, and Public Service operates the College Success Component of the program. Each year, 10 Reading city students are offered full-tuition scholarships to attend Alvernia. Functioning as a self-supporting cohort, the group is provided with a faculty member to serve as their academic mentor throughout the course of their time at Alvernia. Each scholar is assigned a community mentor to help them balance work, family, and school while exploring career opportunities.

Syanashailyn Ortega, a 21-year-old Reading native, is a member of the first cohort to experience the Reading Collegiate Scholars Program. She is expected to graduate May 12. She attended the Celebration of Giving dinner to thank the Herbeins for their support of the program.

Carl and Kathy were married in 1969. They have two sons, Andrew, husband of Sherry, and Peter, husband of Stephanie, and they have four grandchildren: Emily, Jack, Charlotte, and Leo.

Carl is Chief Executive Officer of Herbein + Company Inc. Since founding the firm in 1972, Carl has developed a team of CPAs who service dairy clients throughout the United States and are nationally recognized experts on dairy cost accounting.

Kathy has also served in many leadership positions, including Chair of the Foundation for the Reading Public Museum and as a board member and board chair at Berks County Community Foundation, to name a few. Kathy currently is a board member of Berks Catholic and served as co-chair of the Berks Catholic Capital Campaign. Kathy also serves on the board of the Reading Hospital Foundation and is a member of the Community Benefit Committee at Reading Health System.

Kathy has been recognized by the Girl Scouts with a Take the Lead Award and has received Alvernia University’s Ellen Frei Gruber Award for service to her alma mater.

Together, Carl and Kathy have been recipients of Alvernia University’s highest honor, the Franciscan Award, given for dedication and service to the community.

Although many local organizations receive support from the Herbeins, Alvernia University holds a special place in their hearts. A 1995 graduate of Alvernia, Kathy was the founding chair of the Alumni Council. Kathy and Carl have served as co-chairs of Alvernia’s Values and Vision Campaign. Kathy chaired the 2004 Presidential Search Committee at Alvernia. She served as vice chair and then chair of the Alvernia Board of Trustees from 2005 to 2011, and was the first graduate of the University to hold the latter position. She was one of the key trustees to guide Alvernia’s progress from college to university.

The Thun Award was created in 1988 to recognize the lifelong commitment that was shown by Ferdinand K. and Louis R. Thun to improve the quality of life in Berks County through philanthropy. Since that time, the award has been presented to Berks County residents who make significant contributions of civic service and who exhibit a steadfast commitment to the community. Not long after its founding in 1994, the Community Foundation became a partner in the Thun Award. Recipients of the award exemplify the mission of the Foundation: to promote philanthropy and improve the quality of life for the residents of Berks County. Fulton Bank has been a partner in the Thun Award for many years.

“While we mourn his passing, we are fortunate that we were able to celebrate with him last year and recognize all that he and his wife, Carole, have done for Berks County,” Murphy said.