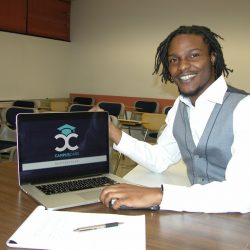 Growing up in Brooklyn, Tate knew at age seven that he would become CEO of his own company

Penn State Berks junior Jovan Tate has launched a pilot program for his fledgling company, Campus Cars Inc., created to bring car sharing to fellow students at Penn State Berks who do not have access to their own vehicles. It’s a company that was just a brainstorming idea less than a year ago.

For Tate, a Business major with the Management and Marketing option and a minor in Entrepreneurship and Innovation, Campus Cars is proof that his decision to enroll at Penn State Berks in 2014 was one of the best he has ever made.

And, unlike many of us, the hands-on businessman was fortunate enough to know what he wanted early on. “I knew since I was seven-years-old that I wanted to become the CEO of my own business,” he recalled.

The 22-year-old who was raised in Brooklyn had a lot of support from family. “I grew up in an environment where business and self realization were very important. My late grandfather owned businesses in Jamaica, my aunt worked for a major London advertising agency and my parents always encouraged me and my ideas.”

When asked why he chose to attend Penn State, Take explained, “I graduated from It Takes A Village Academy in Brooklyn, which was very inspirational, but my school choices up to that point were dictated to me. I chose Penn State because I knew it had a great academic environment. Obviously it has been a good match for me and I am looking forward to graduating.”

One thing Tate did not lose focus on was starting his own company and during his sophomore year, while brainstorming ideas with a friend, he came up with the idea for Campus Cars thanks to his knowledge of car sharing offered by companies such as Zipcar, Uber and Hertz.

“Zipcar was an inspiration because I was familiar with it in New York. But then I came to Berks and did not have a car for the first two years I lived on campus. So I was walking to work and relying on my friends who had cars whenever I need to go anywhere. That was an extreme limitation for me.”

“Then it just made sense to me–renting cars to local students and particularly those right here at Penn State Berks. And I thought that I could change the business model to make the costs reasonable for fellow students and their parents. They wouldn’t have to pay for a car or need insurance or maintenance and they wouldn’t be confined to campus. That’s why our tagline is, ‘­­­­Anywhere is now much closer.’”

The pilot program, which is expected to work out some of the kinks according to Tate, will run until the fall 2018 semester, when the real version is launched. Campus Cars customers will be able to select from the best hourly package for them, paying one flat fee for pre-reserved hours. Students may share their time with other students and can pickup and return the car to a location near the college’s residence halls using an unlock/lock app created by Tate. Unlike other car sharers, there are no membership fees.

Depending on demand among the estimated 400 Penn State Berks students without cars, Tate said Campus Cars will initially stock a pair of 2017 or later model cars with current options and safety features and eventually expand its inventory to include vans, trucks and other vehicles. He also hopes to be able to expand his venture to other Penn State campuses.

“I think we can save students as much as 50 percent over other car sharing options,” he projected. “Our goal is to save members as much as possible while giving them the opportunity to drive a lot longer.”

Tate noted that while car sharing has existed since 1948 in Switzerland, it has only existed as an option in the U.S. for the last 15 years. According to Global Marketing Insights, the car sharing market–95 percent of which is controlled by four companies­–will exceed $16.5 billion by 2024.

He invested a significant amount of time and research into developing financial projections and his business plan targeted the college market, drawing on many resources in addition to those available at Penn State Berks. His plan, he added, was sufficient enough to encourage his parents to invest $15,000 start-up capital.

“Early on, I also contacted successful car sharing executives such as Michael Lende, founder and CEO of Student CarShare, Canada; Dave Brook, Senior Carsharing Consultant with Team Red International, and Steven Messino the founder and CEO of MuvMe Inc. They have been instrumental in getting us to market faster.”

Tate’s networking includes participation in events such as the second Penn State Venture and IP Conference held in April and the February 2018 Silicon Valley Startup Grind Global Conference for Entrepreneurs where new ideas are pitched to venture capitalists.

For Tate and other students at Penn State Berks, learning isn’t limited to the classroom. Students in any major can minor in Entrepreneurship and Innovation.

“The minor allows students to hone their skills or creative thinking and problem solving,” said Dr. Janelle Larson, head of the Division of Engineering, Business and Computing.

She goes on to discuss variety of ways students can enhance their education. “At Penn State Berks, students have the opportunity to conduct research with faculty, gain experience through internships and interact with local businesses and nonprofit organizations through our Berks Learning Factory and Flemming Center for Creativity, Entrepreneurship and Economic Development,” continued Larson.

Tate has been fortunate enough to have known at a tender age what he wanted to do. Now, with the knowledge and skills he gained at Penn State Berks, he can build on that dream for the rest of his life.