America to perform in Reading, PA this December 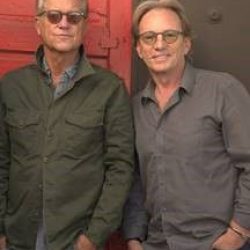 Santander Performing Arts CenterFriday, December 7, 2018The year 2015 marked the 45th Anniversary of perennial classic-rock favorite, America. Founding members, Gerry Beckley and Dewey Bunnell (along with former band mate Dan Peek) met in high school in London in the late 1960s and quickly harmonized their way to the top of the charts on the strength of their signature song “A Horse With No Name”. America became a global household name and paved the way with an impressive string of hits following the success of their first #1 single.  Forty plus years later, these friends are still making music together, touring the world and thrilling audiences with their timeless sound.America’s journey has found them exploring a wide variety of musical terrain.  Their best-known tunes, which also include “I Need You,” “Ventura Highway,” “Don’t Cross The River,” “Tin Man,” “Lonely People,” and “Sister Golden Hair” were cornerstones of 1970’s Top 40 and FM rock radio. Yet beyond their impressive catalog of hits, listeners would discover there was always much more to America than surface perceptions. The combination of Gerry Beckley’s melodic pop rock and Dewey Bunnell’s use of folk-jazz elements, slinky Latin-leaning rhythms and impressionistic lyric imagery contrasted well with Dan Peek’s more traditional country-rock leanings and highly personal lyrics.America’s albums–six certified gold and/or platinum, with their first greatest hits collection, History, hitting four plus million in sales–displayed a fuller range of the trio’s talents than did their singles. Their material encompassed an ambitious artistic swath; from effects-laden rockers to oddball medleys to soul-bearing ballads, America displayed a flawless blend of disparate genres and styles as wide-open as the great American plains.Tickets go on sale Friday, May 18 at 10am online at Ticketmaster.com and in person at the Weidenhammer Box Office at the Santander Arena in Reading, PA!