Ryan Howard to be inducted in Baseballtown Hall of Fame on Tuesday, August 14th 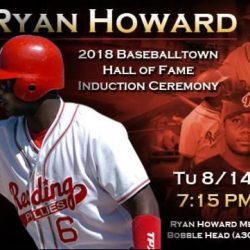 Ryan Howard will be inducted into the Baseballtown Hall of Fame(Reading, PA) – The Reading Fightin Phils, the double-A affiliate of the Philadelphia Phillies have announced that former Reading Phillies first baseman, Ryan Howard will be inducted into the Baseballtown Hall of Fame on Tuesday, August 14th. Ryan Howard won Rookie of the Year in 2005, National League Most Valuable Player in 2006, National League Championship Series MVP and the 2008 World Series with the Philadelphia Phillies. He will go down as one of the best power hitters in the history of the organization.However, before the stardom he made his way through Baseballtown. Howard played 102 games with the Reading Phillies in 2004 and was very impressive.  Howard hit .297 with 37 home runs, 102 RBI, 18 doubles and scored 73 runs.The three-time MLB All-Star made an impact every place he was and along with that came plenty of hardware. While playing at America’s Classic Ballpark in 2004 he won Rookie of the Year, MVP, was named a Post Season All-Star, and won the MiLB Joe Bauman Home Run Award.Howard set the single season home run record with 37 in 2004. He held onto that record for eight years until Darin Ruf surpassed it in 2012 with 38 home runs. He currently sits fourth behind Dylan Cozens, Rhys Hoskins and Ruf, all time in home runs in a season for the most storied minor league baseball team, the Reading Fightin Phils.The Baseballtown Hall of Fame Ceremony and Induction will take place on August 14th. For individual tickets visit fightins.com/tickets or call 610-375-8469.  First pitch is scheduled for 7:15 p.m. against the Hartford Yard Goats.  The first 3,000 adults will receive an “Old School” Bobblehead.