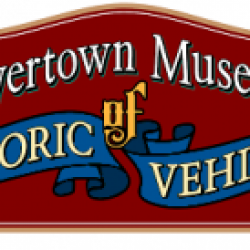 Boyertown, PA  – Over 120 former employees of the Boyertown Auto Body Works will reunite this Saturday, May 19 at the Boyertown Museum of Historic Vehicles.  From 2pm-4pm, an Open House for former employees is being held in the Museum gallery—a fitting venue since the Museum is housed in one of the BABW factory buildings.  Former employees will gather and share stories and memories while Body Works history and memorabilia, including trucks, will be highlighted and on display.  Over the past year, Museum staff and volunteers have been gathering contact information of former BABW employees and response from the alumni has been positive, as more than 120 employees have RSVP’d for this event.

The Boyertown Auto Body Works was founded in 1926, when three businessmen—B. Frank Hafer, J. Georgr Hoffman, and W. Howard Swartz—purchased the Boyertown Carriage Works and changed its business model.  The Boyertown Auto Body Works would now build truck bodies, though a few wagons would still be built in the early days of the truck body business.  Continuing the tradition of Pennsylvania German craftsmanship, the BABW went on to become one of the most successful Berks County businesses.  With its focus on commercial delivery bodies, the BABW earned for itself a national reputation with its contributions to the military effort during World War II.  It won the Army-Navy E Award for the tough ambulances and trailers built for the United States Marine Corps.  After the war, the BABW earned further government work, including, but not limited to, truck bodies for the US Postal Service and Civil Defense.  The BABW would also branch into the world of electric vehicles with the establishment of the Battronic Division, which manufactured battery-operated delivery trucks.

Never forgetting its delivery truck roots, however, the BABW continued throughout its duration to manufacture delivery trucks for countless vendors.  Everything from pretzels to furniture and milk to pianos could be delivered in a Boyertown-bodied truck.  The BABW never stopped innovating.  It was one of the first to have recreational vehicles on the market.  In the 1970s the company debuted a trolley bus for the Bicentennial Celebration in Fairmount Park.  Despite, however, the BABW’s ability to adapt from the carriage days to the motorized era, the company had to shut its doors in 1990.

The Boyertown Museum is looking forward to welcoming these men and women and hearing their stories about their time at the Boyertown Auto Body Works.

The Boyertown Museum of Historic Vehicles is open seven days a week from 9:30am -4:00pm.

The Museum, located at 85 South Walnut Street in Boyertown, PA preserves the transportation history of Pennsylvania and displays over eighty locally manufactured cars, trucks, carriages, motorcycles, sleighs, and other types of vehicles.  Also on display are two examples of roadside architecture: a 1921 cottage style Sunoco gas station and a 1938 Jerry O’Mahony diner.  The 1872 Jeremiah Sweinhart Carriage Factory is open most Saturdays and by appointment.  Admission rates are $8.00 for adults, $7.00 for seniors and AAA, and ages 15 & under are free.  For more information call 610-367-2090 or visit www.boyertownmuseum.org.