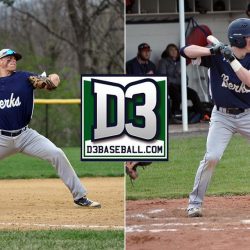 Penn State Berks’ Toby Welk was named the D3baseball.com Mid-Atlantic Region Player of the Year and was selected to the All-Region First Team for the second straight season. Dante Salerno earned a spot on the All-Mid-Atlantic Third Team, which was announced by D3baseball.com on May 21.

Welk is the first member in program history to earn All-Region Player of the Year honors. Welk and Salerno’s inclusion on the All-Region teams marks the first time that Penn State Berks had more than one player honored in a season by D3baseball.com.

Salerno garners his award after a strong season at the plate in his first year with the Nittany Lions. The sophomore shortstop batted .447 (46-for-103) with four doubles, three triples, 17 RBI, and 37 runs scored. He ranks eighth in all of Division III with his .541 on-base percentage, while his batting average is the 12th highest in the nation. Salerno made the biggest impact on offense with his speed, finishing 19-for-22 on stolen base attempts. Salerno etched his name among the top-10 in the single-season record books for triples, on-base percentage, stolen bases, and hit by pitch (8). In the field, Salerno recorded 75 assists, 33 putouts,and had a hand in 10 doubles plays, while playing the bulk of the season at shortstop.

Welk, Salerno and the Nittany Lions finished with the most wins in program history after finishing the season 25-10. They won the NEAC Championship for the third straight season and earned a fifth straight appearance in the NCAA Tournament.