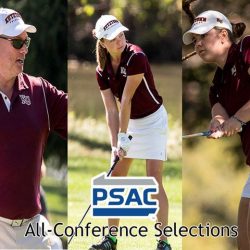 KUTZTOWN, Pa. – The Kutztown University women’s golf team had its best season in program history this year, and the Pennsylvania State Athletic Conference (PSAC) took notice. KU was well represented on the All-PSAC teams, as PSAC Coach of the Year Robert Fisher guided First Teamer Shannon Weber and Second Team representative Jillian Jones to All-PSAC honors as released by the league office on May 24.

In his 17th season at the helm, Fisher was named PSAC Coach of the Year for the first time in his career as a women’s golf coach. He was named Coach of the Year as Kutztown’s wrestling coach in 2014 and 2015, where he has led the charge for the past 18 seasons.

Weber shot a school-record 78.7 across 21 rounds during her senior season, the first player in KU history to average less than 80. She won three times and finished in the top-five in 10-of-12 tournaments. She shot 75 or under four times, and finished her season with a 27th-place finish at the NCAA East Super Regionals in Michigan (May 7-9). The Kutztown native has been voted All-PSAC for the third time in her career, and was also named PSAC Golfer of the Week twice this season.

Jones shot a KU freshman record 80.7 across 21 rounds in her freshman season, third in KU history. She won East Stroudsburg’s and Alvernia’s Spring Invitationals, and finished in the top-five four times. She shot a season-best 75 twice, and finished her season with a 42nd-place finish at NCAA’s.

The Golden Bears finished in ninth place in their first-ever NCAA East Super Regional tournament on May 9, after winning the program’s first PSAC championship in the fall. KU won a school-record seven tournaments and finished in the top-two in all 11 of its regular-season invites. All five of KU’s starters ranked in the top-11 in school history for single-season average and showcased the school-record-holder and first player in school history to average under 80 in Weber.