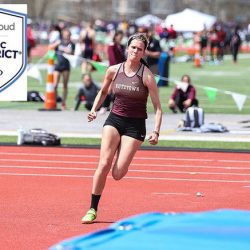 It is the first CoSIDA Academic All-District honor for Fagan.

Fagan enjoyed a successful senior season, both at the indoor and outdoor competition. She was named to the USTFCCCA All-Atlantic Region Team in the high jump for the indoor and outdoor seasons. The Grove City native won her second career Pennsylvania State Athletic Conference (PSAC) Championship and first outdoors this year, clearing a mark of 5-5 to win the title.

A three-time PSAC Scholar-Athlete, Fagan was given the 2017-18 Coaches Award for the KU track and field program.

Fagan is a special education major and has accumulated a 3.95 GPA. She has also earned Dean’s List honors every semester she has been on KU’s campus.

Six other student-athletes from four PSAC institutions, including Bloomsburg, California (Pa.), Seton Hill and Shippensburg, were selected to the All-District First Team.