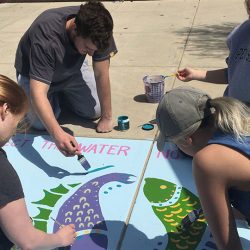 Penn State Berks students teamed up with the City of Reading Public Works Department to implement projects that will inform residents about the harmful effects of dumping chemicals and litter into the storm drains leading into the Schuylkill River.

Eight students in the Environmental Science courses researched the effects of chemicals and litter going into storm drains on natural waterways, including the Schuylkill River, and the effect on the entire food chain. Then they took action by stenciling forty-four storm drains near 5th and Penn Streets in Reading. The stencil, which reads, “No Dumping, Drains to River” in both Spanish and English, informs residents that what goes down the drains ends up in the Schuylkill River.

In the other initiative, four elementary schools in Reading were chosen to receive eye-catching, child-friendly murals created by students in the Introductory Painting course. The schools included 12th and Marion, 13th and Union, Amanda Stoudt, and Northwest Elementary. Students sketched mural ideas, which were presented to City Public Works employees Robert Gensemer and Ted Arentz, for use in their community education MS4 program, a stormwater management program for minimizing the impacts from runoff. After Gensemer and Arentz selected the drawings, D’Aries and her students created stencils for the murals.

These projects were facilitated by the City Public Works Department and the Penn State Berks Center for Service Learning and Community-Based Research.