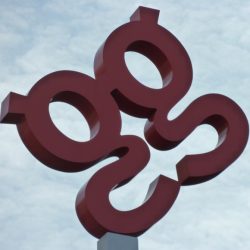 The Summer Artist-in-Residence Program was created to infuse new, creative energy to the GoggleWorks community with an emphasis on facilitating cross-disciplinary experimentation. The residency provides personal studio space, access to GoggleWorks’ seven communal studios, housing, and generous stipend. The call for artists resulted in over 40 applicants, including several international artists, with the final three selected via jury process. A culminating exhibition showcasing the residents’ work will open on August 10th at 5:30pm in the Schmidt Gallery.

Karina Mago is a Venezuelan artist currently traveling throughout the United States. Raised in Caracas, then promptly transplanted to South Florida, she crafts images that are inspired by an immigrant’s sense of displacement. She received her BFA from Florida State University with concentrations in ceramics, painting and printmaking.

“My work is informed by my experiences as a Venezuelan immigrant; one who, like many, has lost the ability to both physically and emotionally return to her place of origin because she no longer belongs there. An individual whose fate was sealed by a decaying government that has ignored the needs of its citizens, while feasting on unceremoniously earned riches. I make in order to cope with that sense of loss of place, but also to celebrate the fact that I was lucky enough to escape.”

In 2010 Joseph Cavalieri established CAVAglass, a glass studio in the East Village of New York City. His focus is on making private and public commissions, teaching private classes, and making one of a kind glass art, using methods created by Medieval stained glass artists. He has been invited to 14 art residencies in the US, South America, Europe, Australia and India, including the Open Studio Program at the Museum of Arts and Design in New York City. In 2015 Cavalieri was invited to be the keynote speaker for theGlass Society of Ireland and NCAD Conference.

“I describe my work as ‘pop’ stained glass. I have done collaborations with R. Crumb, and have used Simpson’s images in my work. During my 10 weeks I will make four highly illustrative stained glass panels based on the book ‘Alice in Wonderland’. I have illustrated many Grimm and Aesop Fables in the past, and Alice has always been of great interest.”

Born in Poland in 1984, Bartosz Beda relocated to the UK in 2008 to study at the Manchester School of Art. After graduating in 2012 with a MA in Fine Art, Beda was selected for the 2012 Catlin Art Guide as the most promising emerging artist in the UK. Short-listed for the Title Art Prize, the Door Prize, and selected for The Saatchi New Sensations 2012, group exhibition in London for most exciting graduate students in the UK.

“I would like to focus my work on the issues of the immigration in European countries that has been allowed since 2005, as well as the immigration of Mexicans trying to enter the United States illegally. The work I plan to make will symbolize their unheard voices. I like to explore political issues in my painting. These issues often expose themselves in hidden meanings. Art has often educated and opened eyes to social and political issues. I hope my paintings can do the same.”