Your Berks History is Coming to Penn Street in Downtown Reading 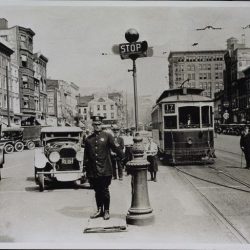 The Berks History Center and the Reading Downtown Improvement District Authority are pleased to announce the launch of Berks History on Penn, a collaborative, community art installation that explores the history of downtown Reading through photographs from the Berks History Center’s collection. The exhibit will be located in the windows of the Callowhill building on the corner of 5th and Penn Streets.

Berks History on Penn is being installed by the Reading Downtown Improvement District Authority (RDIDA), the Berks History Center (BHC) and students from the Reading Muhlenberg Career and Technology Center. The project is funded by the Penn Street Arts Grant program of Berks County Community Foundation.

Following installation, Berks History on Penn will be on exhibit through the end of 2019 pending sale of the building and can be enjoyed during a number of events on Penn Street including the MidDay Café on July 25th; Downtown Alive concert series June 20th, July 18th, August 15th, September 12th and 19th; First Friday Downtown Beer Gardens July 6th, August 3rd, September 7th; and the Penn Street Market every Thursday through the end of September.

As a partner with RDIDA and the Penn Street Market, the BHC will participate in the Penn Street Market as a community vendor every Third Thursday of the month, starting with the kick-off the Berks History on Penn social media project on Thursday, June 21, 2018. During the BHC’s kick-off Third Thursday at the Market, the BHC will launch a community-wide selfie contest on social media. Participants are encouraged to snap creative, history-inspired selfies in front of the Berks History on Penn photographs and share on social media using the hashtag #BerksHistoryonPenn. Participants will then be entered into a special giveaway drawing. Each month, the BHC will award drawing winners special prizes including: history books such as the Passing Scene, free BHC memberships, free passes to BHC’s 2nd Saturday programs, or tickets to the 6th Annual Magical History Tour concert.

“Partnering with the RDIDA has been an organic and successful collaboration.” says Executive Director, Sime Bertolet. “In their work to create a vital, vibrant, productive, and commercially active environment in downtown Reading, RDIDA has championed the value of our community’s rich history as an essential element of what makes the city of Reading such a great place to live, work and play. The Berks History on Penn project is an opportunity to garner interest and increase visitation to the Downtown Improvement District while showcasing the rich history of downtown Reading.”

Charles Broad, Executive Director of the Downtown Improvement District, pointed out that the collaborative effort is yet another way to boost center city’s vitality.

“This is a creative use of vacant space in the heart of the city,” Broad said. “It’s going to stir up a very positive buzz and help promote the marketing of these valuable properties in the heart of Reading.”