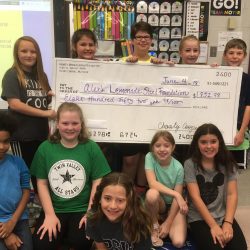 Most clubs at Honey Brook Elementary Center are formed to provide children with an extra-curricular activity after school. But recently, a different type of club was created. The Community Service Club consisted of a group of ten, fourth-grade students who banded together to try and help others. In the first-ever project of their existence, the club decided to organize an Alex’s Lemonade Stand in the hopes of raising much-needed money for pediatric cancer research. Those efforts yielded great results!

During a two-week time period, club members sold lemonade during the school’s lunch periods. Under the guidance of their advisers, 4th grade teacher, Janeen Moyer and 3rd grade teacher, Brian Emerich, the group made and sold nearly 75 gallons of lemonade at 50 cents per cup. They also held a stand during the school’s Evening of the Arts and Grandparents’ Day celebrations. Including sales and donations, the group contributed a total of $852.98 to the Alex’s Lemonade Stand Foundation for Pediatric Cancer Research.

Members of the group included Mila Althouse, Sarah Black, Olivia Escalona, Alexis Hartl, Emma Mattson, Kylie Pinkett, Kenadie Shreiner, Emily Snyder, Izzy Thomas and Brian Yagle. Group members met once per week after school to plan and promote their event. They also gave up some of their own lunch and recess time in order to work at the stand selling lemonade. Everyone learned the very valuable lesson of giving back in the community and they all hope to continue this type of work as they move on to Twin Valley Middle School next year. The group would like to thank the Honey Brook Elementary PTO for helping to provide lemonade mix and cups for the sale.

The Alex’s Lemonade Stand Foundation (ALSF) is a non-profit group raising money for research in the fight against pediatric cancer.  Its namesake is Alex Scott, a young cancer patient herself from right here in Southeastern Pennsylvania, who unfortunately died from this dreaded disease. Prior to her passing, Alex convinced her parents to help her organize a lemonade stand to raise money for cancer research. The story of her courageous act, in the face of her own battle with cancer, made national headlines and soon began a nationwide effort to raise additional funds. Thus, was the beginning of the Alex’s Lemonade Stand Foundation. You can learn more about ALSF at their website: www.alexslemonade.org