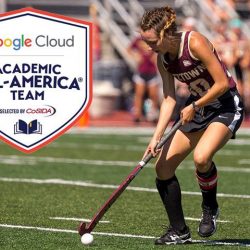 The Plymouth Meeting native earned a Bachelor of Science in May, with a concentration in Sport Management, concluding her academic career with a flawless 4.0 GPA. She was named to the Academic All-District Team for the second time of her career this season and was named KU’s 2018 Female Senior Scholar-Athlete of the Year in April.

A four-time All-Pennsylvania State Athletic Conference (PSAC) selection, three-time PSAC Scholar-Athlete and two-year team captain, Konowal completed her career in the Maroon and Gold starting in all 73 games and collecting 12 goals and 12 assists from her midfield position.

Konowal was an eight-time Dean’s List honoree and three-time NFHCA Scholar of Distinction (3.9+ GPA). The career sweep of All-PSAC accolades recorded by Konowal is the first in four years at KU, an achievement last reached in 2013. The field hockey program won 41 games during Konowal’s four years as a starter.