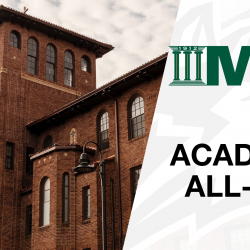 A total of 123 student-athletes from the 17 MAC schools across 11 sports received the honor. Student-athletes must have a minimum GPA of 3.20 in the semester of competition to be considered for the honor, and the honorees are selected based on their success in the classroom and in their respective sport.

Representing women’s golf, Gilbert, a junior Healthcare Science major, was named the 2018 MAC Women’s Golfer of the Year after earning low-medalist at the 2018 MAC Championship for the second year in a row. Gilbert earned low-medalist honors in five regular season tournaments as well. Gilbert was named MAC Golfer of the Week four times. She had a junior year average of 82.3, her lowest average since joining the program. Gilbert also was a member of the first team in Alvernia Women’s Golf history to compete in the NCAA DIII Women’s Golf Championship, where she posted a three-day total of 248. This is the third year in a row Gilbert has been named Academic All-MAC.

Also representing women’s golf is senior Cayla McCarty. McCarty, an Athletic Training major, was named first team All-MAC and was the runner-up at this year’s MAC Championship with a two-day score of 172. McCarty had a season average of 89.7 over 21 rounds of golf. She posted a season low of 83 two times, including on the first day of the MAC Championship, and had eight top-ten finishes. McCarty was also a member of the first team in Alvernia Women’s Golf history to compete in the NCAA DIII Women’s Golf Championship, where she posted a three-day total of 271. This is the third year in a row McCarty has been named Academic All-MAC.

Representing softball is sophomore Riley Shields. Shields, a sophomore Occupational Therapy major, was named first team All-MAC Commonwealth, NFCA third team all-region, and second team All-ECAC. Shields posted a 1.77 ERA, struck out 84 over 154 innings pitched, and was a two time MAC Commonwealth Pitcher of the Week. She led the MAC Commonwealth with 18 complete games, and was second in the conference with 15 wins. At the plate, she posted a 3.55 batting average and had 33 hits, seven doubles, and a homerun.

Rounding out the Academic All-MAC honorees is sophomore men’s volleyball player Collin Welteroth. Welteroth, a sophomore Biology major, earned second team All-MAC honors and also earned MAC Player of the Week honors. On the season, Welteroth tallied 220 kills, 24 aces, 20 blocks, and a team high 178 digs in 24 matches. He finished second in the MAC in digs per set with 2.12.