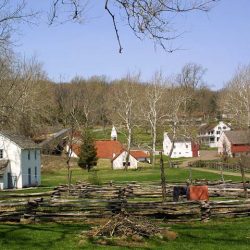 To celebrate Independence Day, the National Park Service and the Friends of Hopewell Furnace invite the public to attend an  inspirational reading of the Declaration of Independence accompanied with music and traditional patriotic songs.  According to Hopewell Furnace Site Manager David Blackburn, the program will be staged on the porch of the Ironmaster’s House at 2 p.m. on Wednesday, July 4.  Admission to the park and event is free.  “On this Fourth of July, we invite the public to re-visit our founding document—The Declaration of Independence ,” commented Site Manager David Blackburn. “Come spread a blanket and enjoy a program dedicated to our founding fathers and mothers.  Enjoy this salute to the sacrifice that they made for the freedoms we cherish today,” he added.  The Declaration of Independence was officially adopted in Philadelphia at 2 p.m. on July 4, 1776. The reading at Hopewell marks the hour of our nation’s 242nd birthday. The program features noted author, playwright and actress Christine Emmert  who will read from the Declaration as well as from letters of the period.  Emmert has had a long career as actress, writer and director. In 2016, she was a finalist in the Jane Goodall competition for 10 minute plays about endangered species.The first public reading of the Declaration of Independence in Berks County was on July 8, 1776. The document was read publicly in villages throughout the area.  Ironmaster  and founder of Hopewell Furnace Mark Bird was brother-in-law to two signers of the Declaration: George Ross and James Wilson.   An early iron making community hopewell Furnace National Historic Site, features the foundations of America’s early iron industry from extraction in the 18thcentury to the enlightened conservation of the 20th century.  In addition to the park’s Independence Day program, visitors can participate in moulding demonstrations, shop at the Village Store, watch several educational videos, and listen to the Voices of Hopewell as they wander through the Village.  The park offers an 18-mile trail system which links directly to French Creek State Park. Hopewell Furnace is open 9 a.m. to 5 p.m. every day during the summer. There is no entrance fee. Hopewell Furnace is located five miles south of Birdsboro, PA, off of Route 345.   For more information stop by the park’s visitor center, call 610-582-8773, visit the park’s web site at www.nps.gov/hofu, or contact us by e-mail at [email protected].