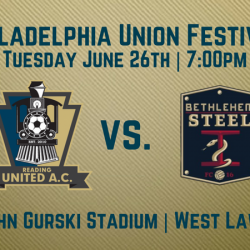 A summertime soccer tradition returns to the Greater Reading area as Reading United A.C. are set to host the third annual Philadelphia Union Festival at Wilson High School’s John Gurski Stadium on Tuesday June, 26 at 7 p.m. The feature event at the 2018 Union Festival will be an exhibition match between Reading United A.C. and Bethlehem Steel F.C..

Philadelphia Union Festival 2018 is a celebration of the unique partnership between Major League Soccer’s Philadelphia Union and their local affiliates, Bethlehem Steel of the United Soccer League and Reading United of the Premier Development League.

United have been an important piece of the Philadelphia Union’s unique player development structure since 2010. The partnership has allowed Reading to become one of the PDL’s benchmark organizations. Reading has claimed two division titles and produced over 50 professional soccer players since becoming the Union’s official Premier Development League affiliate.

Burke cited the importance of Reading United as a key piece in the Union organization, saying, “Reading is really important to what we do, always has been dating back to my time there. It’s great that we’ve been able to continue to grow the program. {Reading Head Coach} Alan McCann’s been doing a fantastic job identifying players and also driving the team.”

The Bethlehem Steel boss continued, “It’s an important relationship for us to continue to maintain and grow and games like this give everybody, and specifically the Reading players, a great opportunity to show what they might be. Guys like C.J. Sapong, Ray Gaddis, John McCarthy and Keegan Rosenberry have played in these games in the past. It’s not a game we take lightly, but a game that’s a celebration for the whole organization.”

Fans will have the opportunity to watch the many up and coming prospects within the Union organization when Steel and United meet on the field for the third consecutive season. Reading United midfielder Aaron Molloy is currently the top rated prospect in the Premier Development League. Reading defenders Daniel Krutzen, Lamine Conte and Kamal Miller are also ranked among the PDL Top 50 prospects.

Reading United General Manager George Gadebusch added, “As the first Premier Development League club to forge an affiliated relationship with a Major League Soccer team, we highly value our partnership with the Philadelphia Union, Bethlehem Steel and Union Academy. Through that partnership, we are able to bring the best amateur talent into Berks County year in and year out, many of whom have gone on to join the professional ranks within the Union organization or elsewhere after their time in Reading. The yearly Philadelphia Union Festival gives us the opportunity to further highlight that great partnership and bring top notch professional players right into our local community.” Gadebusch expects fans will enjoy the Union Festival experience, saying, “Combining the great show of professional players in the friendly game with the fun festival atmosphere of the Union Mobile Marketing Team is something that will bring excitement to Berks County and provide fun for all!”

Local fans can look forward to a meet and greet with Philadelphia Union players and staff. There will be give-aways, activites, and other exciting opportunites for fans in attendance.

Tickets for the 2018 Union Festival and all remaining regular season Reading United matches are available at www.readingunitedac.com. Contact our ticket sales team at [email protected] for all your group needs.