The Magpie Salute to Headline Next Downtown Alive Outdoor Concert 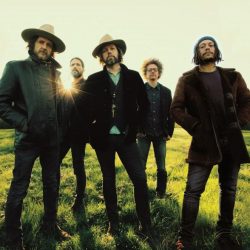 Another monster concert that’s free to all is coming up fast — The Magpie Salute on Wednesday, July 18. It’s all part of the Downtown Alive free outdoor concert series.

The Magpie Salute features musicians who have played together for decades throughout various projects and share a musical bond. The band brings Rich Robinson, the guitarist and co-founding member of The Black Crowes, together with two key members of Crowes fame — guitarist Marc Ford and bassist Sven Pipien — alongside drummer Joe Magistro, keyboardist Matt Slocum and lead singer John Hogg.

To whet your appetite for the show, here’s a taste of Magpie’s rendition of a Crowes favorite, “Remedy”:

And here’s one of their new songs, “Omission”:

The Magpie Salute is the second of five free shows going on in the 500 block of Penn Street this summer as part of the Downtown Alive outdoor concert series. Local rock jam trio Flux Capacitor will kick off the night’s festivities.

All the shows have a block party atmosphere and feature a wide assortment of food and beverages. There will even be a “kids play zone” with face painting, balloon animals, and a magician.