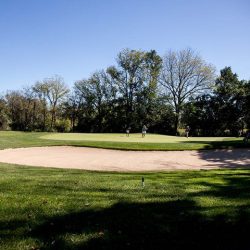 This is the second career honor for Graham and Tarnopoll, while Weber celebrates her first WGCA All-American Scholar award.

A total of 1,011 women’s collegiate golfers were recognized with this prestigious honor. The criteria for selection to the All-American Scholar Team are some of the most stringent in all of college athletics. The minimum cumulative GPA is 3.50.

Graham is coming off a career-best season, when she averaged an 81.8 across 21 rounds in her junior season, sixth in KU history. She won ESU’s Fall Invitational and finished in the top-three four times. She shot 75 or under twice and finished her season with a 55th-place finish at the NCAA East Super Regionals in Michigan. She enters her senior year with an 85.1 career average, eighth in school history. She is a three-time Pennsylvania State Athletic Conference (PSAC) Scholar-Athlete and six-time Dean’s List honoree.

Tarnopoll shot a career-best 83.2 across 21 rounds in her junior season, 11th in KU history. She had five top-10 performances, including a third-place finish at Alvernia’s Fall Invitational. She shot under 80 four times, in four-straight rounds, with a season-best 76 at LeMoyne, and finished her season with a 58th-place finish at the NCAA East Super Regionals in Michigan. She enters her senior year with an 84.3 career average, fifth in school history. Tarnopoll is a three-time PSAC Scholar-Athlete and four-time Dean’s List student.

Weber was an All-PSAC First Team golfer and shot a school-record 78.7 across 21 rounds in her senior season, the first player in KU history to average less than 80. She won three times and finished in the top-five in 10-of-12 tournaments. She shot 75 or under four times, and finished her season with a 27th-place finish at the NCAA East Super Regionals in Michigan. Weber is a three-time PSAC Scholar-Athlete and a four-time Dean’s List student.

About the Women’s Golf Coaches Association

The Women’s Golf Coaches Association, founded in 1983, is a non-profit organization representing women’s collegiate golf coaches. The WGCA was formed to encourage the playing of college golf for women in correlation with a general objective of education and in accordance with the highest tradition of intercollegiate competition. Today, the WGCA represents over 600 coaches throughout the U.S. and is dedicated to educating, promoting and recognizing both its members and the student-athletes they represent.