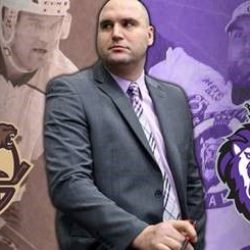 The Reading Royals, ECHL affiliate of the Philadelphia Flyers and Lehigh Valley Phantoms, announced Tuesday that former Assistant Coach Patrick Wellar has been named an Assistant Coach with the Hershey Bears of the AHL.

Wellar was the Royals Assistant Coach in 2017-18. The 34-year-old won the 2010 Calder Cup with the Bears and the 2013 Kelly Cup with the Royals. Wellar is one of four players to have his named engraved on the Kelly Cup three times.

“I would like to thank Kirk MacDonald and the entire Reading Royals staff for an amazing year,” Wellar said. “It has been great to learn from Kirk and I will always be grateful for him giving me the opportunity to be his assistant coach. It was amazing to have been able to coach an organization I care so deeply for.

“Finally, I can’t thank our players enough for having the honor of being their coach. We had the privilege to work with a special group of young hockey players and I wish them nothing but the best going forward. ”

The Royals will open the 2018-19 regular season at Santander Arena on Sat., Oct. 13 at 7 p.m. vs. the Worcester Railers. The home opener will feature a special Block Party and “Red Carpet” presentation for the team.