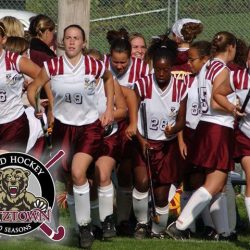 KUTZTOWN, Pa. – 2018 marks the 50th season of Kutztown University field hockey. In celebration of the program and its alumni, KU will be announcing All-Decade Teams throughout the summer, leading up to the announcement of KU’s All-Time Team. KU will release a new decade every week, and this week, we look at the All-Decade Team for the 2000s.

Former KU field hockey players had to meet one of the following requirements to be named to an All-Decade Team, and placed on the ballot for the All-Time Team. After their public release, a compiled list of All-Decade Teams will be added to the main headquarters for 50 Seasons of KU Field Hockey.

•           Member of KU Athletics Hall of Fame, for accomplishments primarily in field hockey

Save The Date: Saturday, Oct. 20 – On the day of KU’s home field hockey game against Slippery Rock (12:00 p.m.), the university will celebrate the program’s 50th season. All alumni and coaches are invited back to take part in a pre-game recognition on the field, KU’s All-Time Field Hockey Team will be recognized at halftime, and a post-game reception will be held at the Student Rec Center. Please register for the event to ensure accommodations can be made.

School-Record 39 Assists in a Career

School-Record 23 Defensive Saves in a Career