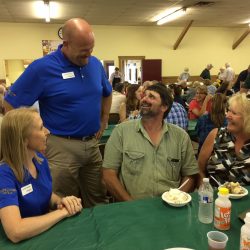 WYOMISSING, PA – Tompkins VIST Bank recently continued its tradition of hosting an annual luncheon for agricultural customers, and this year – the fourth – was the most successful yet.

About 175 guests, more than past years, attended the event at the Leesport Farmers Market in Berks County.  The meal included pulled pork, corn on the cob and ice cream, all from regional food producers. It was served by Tompkins VIST staff and supporters, including Chairman of the Board Al Weber. Bank President and CEO Scott Gruber welcomed the group and introduced the agricultural banking and other staff members as well as local officials, including State Representative Barry Jozwiak.

Travis Werley, senior vice president and manager, agricultural lending, and his colleague, Lynette Gelsinger, agricultural lender, were the official hosts. In addition to being bankers, both have working farms with their families. “Farming is a difficult business, especially during these challenging times,” Werley said. “This is our way of thanking the farm community for their special role in producing the food so many depend on.”