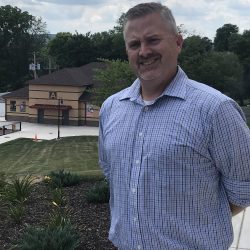 Reading, Pa. (July 24) – Alvernia University Director of Athletics Bill Stiles has announced the hiring of Wes Landrum as the Head Softball Coach of the Golden Wolves.

Landrum joins the Alvernia staff following 13 years as the head coach at Frostburg State University. He takes over for Jenn Castle, who returned to Marietta College, were she was an assistant for eight years, to serve as the head coach for the Pioneers.

“Coach Landrum is a tremendous addition to our coaching staff,” said Stiles.  “He is a proven winner – with over 300 wins, two 30-win seasons, and multiple Conference Championships and Coach of the Year honors.  Most importantly, his coaching philosophy and desire to develop the whole student-athlete fit perfectly with Alvernia’s Mission and Core Values.”

“I am thankful to Athletic Director Bill Stiles and the search committee for giving me this opportunity,” said Landrum. “We have some good recent success to build off here.  I am looking forward to starting my next chapter here in southeastern Pennsylvania.”

​​​​​​​Landrum also has previous history with Alvernia. In 2013, Landrum coached his Frostburg State team to two victories over Alvernia to take the ECAC South Championship, which was hosted at Alvernia’s Angelica Park.

​​​​​​​Landrum will begin work immediately, with the Golden Wolves hosting a fall play-day on September 29, and the spring season set to get underway on February 24.