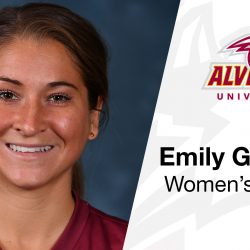 Gingrich joins the Alvernia staff following a year as the head girls soccer coach at Exeter Township Senior High School, and a standout career as a four year starter for Division I Saint Joseph’s University.

“Emily is a rising star in the coaching profession,” said Stiles.  “It is a unique opportunity for us to add someone with her record of accomplishments and success.  She is unbelievably well respected in the soccer community and has already built an extensive network of high school and club coaches in the region and beyond which will serve her well in recruiting.  In addition, Emily comes from a family of excellent athletes, educators, administrators, and coaches.”

A four-time Atlantic 10 All-Conference honoree and three-time All-Region selection, Gingrich rewrote the record books at St. Joe’s during her four years with the Hawks. She is the program’s all-time leader in points (103), goals (43), and shots (305), and is second all-time in assists (17).

A Reading native, Gingrich was a standout player at Governor Mifflin High School. Gingrich was named the Reading Eagle Female Athlete of the Year in 2012 and 2013, and led the Mustangs to Berks County Championship in three straight seasons.  She is the daughter of Alvernia Field Hockey Coach and Associate Athletic Director Laura Gingrich.

“I am grateful for the opportunity to lead the Alvernia Women’s Soccer Program to reach both their personal and athletic goals,” said the younger Gingrich. “These women will be prepared to compete at the highest level, both on the field and in the classroom with an emphasis of integrity and selflessness.”

Gingrich will begin full-time with the Golden Wolves immediately. Alvernia’s 2018 season is set to begin on August 31 with a home game against DeSales University.