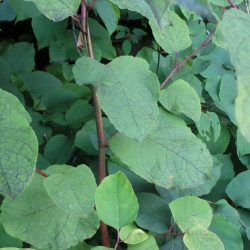 It’s commonly known as Japanese knotweed, also, scientifically, fallopian japonica and polygonium cuspidatum. But its nickname is a bit more telling: “Godzilla weed,” so known because, as Newsweek said in a 2013 article, “it becomes a ‘rapacious monster’.”

The aforementioned article focused on the problem of Japanese knotweed infestation in the UK. Titled “The Invasive Plant That Eats the Value of Your Home,” it went on to describe potential doom for property values based on monster roots that can claw their way right through solid concrete foundations.

More scientific literature than Newsweek bears much the same message, if in a bit less dramatic language.

But how did this ugly beast make its way into our lives? And what’s at risk in our watershed—besides buildings and property values?

She was actually quite a seductress, with her sinewy bamboo-like stems, large heart-shaped leaves, and tassels of little lacy white flowers. A German-born botanist, Philipp von Siebold, brought the plant from East Asia to the UK in 1850 when Victorian Britain was keen on studying and acquiring exotic plants from around the world. Japanese knotweed’s appeal was as an ornamental.  Commercial nurseries began cultivating it and gardeners eventually brought it to the US. But it fairly quickly escaped cultivation and was recognized as a problem by the early 1900s.

Today, Japanese knotweed infestation in the UK is such a problem that anyone who handles or disposes of the plant is required to be licensed, dumping it in the trash is strictly forbidden, and beginning in Spring 2011 the government initiated an attempt at a biological control by releasing a plant louse to try and literally “suck the life out of” the problem (Science magazine, May 13, 2011). A 2016 article in the Financial Times called Japanese knotweed “the global menace,” but reported that the sap-sucking bug, Aphalra itadori, is having some success.

Across the US and the Greater Lehigh Valley, as well, Japanese knotweed, a perennial herbaceous plant from the buckwheat family, is among our most challenging invasive plants. While it is not on Pennsylvania’s list of Noxious Weeds, according to the Financial Times’ research, it’s considered an invasive weed in 12 of the United States and “can be found lurking malevolently” in another 29.

Recently, a band of Penn State Extension Master Watershed Stewards from Northampton, Lehigh and Monroe counties joined staff at Jacobsburg Environmental Education Center to tackle the serious Japanese knotweed problem there, machetes in hand. The Center is part of the greenway within the Bushkill Creek Watershed, which runs from Blue Mountain to the Delaware River in Easton and helps absorb rainfall and runoff, keep the streams shaded and cool, and provide important habitat for native flora and fauna. (Heritage Conservancy)

“It was rewarding,” said Matt Little, among the local volunteers, who also included Dave Bossert, Mary Budkoski, David Due, Jim Folk, Billy Klein, Paula Klein, Greg Korkos, Simon Molloy, Heather Pritchard, Jessica Toohey and Don Wilson. “I got to learn about the invasive species and I got to enjoy cutting it down with a machete. It was a good way to de-stress!”

Invasive species—as PA Sea Grant’s Sarah Whitney taught Penn State Extension’s most recent class of Master Watershed Stewards back in May—are non-native to the watershed and cause harm to the ecology, economy and/or human health.

As a category—and the reason invasives are such a notorious problem, generally—they grow quickly and aggressively, outcompeting natives for space, light, and water. With a mature height of over 10 feet and leaves that grow to roughly 6” long and 4” wide, the bamboo-like stems branch out into dense clumps and create a canopy that is quite overbearing, leafing out in early spring, ahead of many native plants. Meanwhile, underground, the Japanese knotweed is building an extensive but shallow (not great for erosion control) root system of rhizomes, or rootstocks.

Rhizome, defined, explains a whole lot about how Japanese knotweed achieves its lateral expansion rates of up to 6’- 8’ per year.

Rhizome (also known as rootstocks) is a type of plant stem situated either at the soil surface or underground that contains nodes from which roots and shoots originate. Rhizomes are unique in that they grow perpendicular, permitting new shoots to grow up out of the ground. When separated, each piece of a rhizome is capable of producing a new plant.  (Biology Dictionary)

Many of us loath using chemicals to control weeds, and with good reason; but Japanese knotweed is as good a reason as any to make exceptions.

“I’ve seen what walls of Japanese knotweed can do to a stream corridor,” says Rob Neitz, manager of Jacobsburg Environmental Education Center. “I want to make sure that was not replicated here.”

The riparian buffer is the “green ribbon of life alongside a stream,” as defined by Utah State University Extension. Plant diversity in this intersection of terrestrial and aquatic zones has a huge impact on the ecology, affecting water temperature and quality, wildlife habitat and population, in addition to the aquatic food web.

To get Japanese knotweed under control

“The concept,” says Neitz, “is to deplete the plant’s ‘energy reserves.’ By cutting the Japanese knotweed midway through its growing period, you force the plant to utilize any remaining energy to re-grow. Then you hit the plant with an herbicide at the end of the season, killing it off and draining its energy reserves for overwintering and hitting its root system.

“The other benefit to cutting mid-season is that re-growth will be half the height, which allows us to get better coverage and deeper into the stand.”

Getting a handle on Japanese knotweed requires steely and enduring attention. Neitz and his crew have been working on the Japanese knotweed problem at Jacobsburg for 3 years so far. He expects it will be a 5- to 10-year process—with occasional help from volunteers like MWSs and the Bushkill Stream Conservancy—to get to a controllable level, meaning that one or two staffers can manageably treat the remaining population from thereon.

Why isn’t Japanese knotweed such a problem in Japan? Here is a key lesson about the benefits of natives vs. non-natives. Apparently, there, Japanese knotweed has 168 native insects and 40 fungi that keep it in check. (Science magazine, May 13, 2011)

Neitz’s advice to homeowners who might have Japanese knotweed on their property? “Don’t let it get a foothold. But once it’s there, attack it persistently, and expect the process to take multiple years.”

If you do find yourself having to remediate, consider that Japanese knotweed apparently tastes something like rhubarb, only a bit earthier. It’s tart, crunchy, and juicy.  According to the U.S. Forest Service, the young shoots of Japanese knotweed are edible to humans.  You can find dozens of recipes online, for everything from wine and jam to bread and knotweed “crumble.”

So, grab your machete. And bon appétit!

NOTE:  Just this week, Penn State Extension announced a new PA bill (Controlled Plant and Noxious Weed Act, HB 790 and SB 567) has been introduced to both the House and Senate, designed to provide increased awareness to the problem and requiring proactive management of Class A noxious weeds. This would be a great time to let your representatives know your thoughts on this issue.

The Master Watershed Stewards are volunteers that work with the community to improve the health of our streams and rivers.  For more information on the program, visit https://extension.psu.edu/catalogsearch/result/?q=watershed+stewards