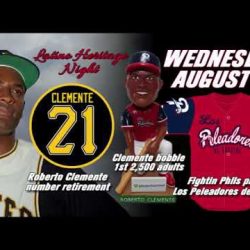 Read and share the story in Spanish here.The Reading Fightin Phils, double-A affiliate of the Philadelphia Phillies, will be retiring Roberto Clemente’s number 21 and hosting Latino Heritage Night on Wednesday, August 22 at 7:15 p.m.In paying tribute to the retiring of Clemente’s number 21 and hosting Latino Heritage Night, the Fightin Phils will be known as Los Peleadores de Reading and will wear specialty jerseys and hats to commemorate the evening.  The specialty themed jerseys worn by the Fightin Phils will be auctioned during the game and proceeds will go to the Puerto Rican Relief Fund.  The first 2,500 adults will be receiving a Roberto Clemente Bobble Head courtesy of Weidenhammer featuring Clemente wearing the Los Peleadores de Reading jersey. “It is a great honor that there are so many people that truly feel strongly about my father’s number getting retired”, said Roberto Clemente Jr.  “The Reading Fightin Phils are retiring number 21, starting a new conversation for young players and fans of opening an opportunity to teach about legacy, humility, pride and love for humanity.  I thank you for keeping his legacy alive!” Roberto Clemente played 18 seasons for the Pittsburgh Pirates from 1955-1972.  He was a 15-time All-Star, a two-time World Series Champion (1960 and 1971), National League Most Valuable Player in 1966, World Series Most Valuable Player in 1971, a 12-time Gold Glove Award recipient and a four-time National League Batting Champion.  Clemente hit .317 in his career and recorded exactly 3,000 hits.  The Pittsburgh Pirates retired his number 21 on April 6, 1973.  He was the first Latin American to be enshrined into the National Baseball Hall of Fame in 1973. “Weidenhammer is proud to partner with the Reading Fightin Phils to honor the great Roberto Clemente”, said Weidenhammer President, John Weidenhammer.  “Personally, Roberto was one of my favorite players growing up; and as amazing of a baseball player as he was, he was also a powerful role model for youth around the world.  At Weidenhammer, we also believe in the importance of being role models.  As we celebrate our 40th Anniversary in business, our team members are actively volunteering their time for many charities and non-profits across the region.  To that end, it is more than fitting to support this event– and to celebrate Roberto’s legacy as an extraordinary athlete, father and humanitarian.” Clemente is not only remembered for his play on the field, but also his work as a humanitarian off the field.  The Puerto Rico native devoted his time during the off-season doing charity work for those in Latin America and the Caribbean.  The Hall of Fame outfielder died in a plane crash on December 31, 1972 after takeoff due to engine failure.  He was set to fly to Managua, Nicaragua to aid those who were affected by a massive earthquake a week earlier.  He was 38 years old at the time of his death. “Roberto died the way he lived, helping others”, said Duane Rieder, Founder and Executive Director of The Clemente Museum in Pittsburgh, Pennsylvania.  “The Clemente Museum was built to celebrate the man he was on and off the field.  The number 21 deserves to be retired because he was the only true baseball hero.  Just because you hit 60 home runs, doesn’t make you a hero.  It makes you an idol!  Roberto gave up his life to help others.”The Clemente Museum will be on hand on Wednesday, August 22nd.  They will be bringing a few items such as a Roberto Clemente Used Bat and his 1966 Gold Glove Award for fans to see. “The Greater Berks County Latino Chamber of Commerce is proud to partner with the Reading Fightin Phils for our 6th Annual Greater Berks Latino Chamber of Commerce Night at the Fightin Phils”, said Sonya Smith, Acting Secretary and Board Member of the Greater Berks County Latino Chamber of Commerce.  “2018 is even more special with the partnership on the Fightin Phils Los Peleadores de Reading Tribute!  What Roberto meant to the Latino community cannot be put into words, Roberto Clemente was not only a great player on the field, but he was a greater person off the field. He was considered a National hero in Puerto Rico and to everyone with a love for baseball, but also a hero in the Latino community for his humanitarian work. He was a talented athlete but known for his love for people, bettering communities and generosity towards those in need.” For ticket information, fans can call the Fightin Phils Box Office at 610-370-BALL or can go online to fightins.com/tickets.