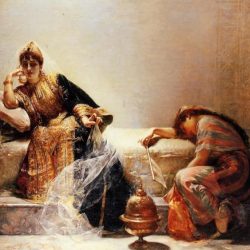 Scheherazade, which tells the musical tale of the 1,001 nights as Scheherazade, the character, mesmerizes the King in order to save her life, ultimately having the King fall in love with her. Also on the program is Mussorgsky’s Night on Bald Mountain.

Tickets for the September 22nd concert can be purchased through Ticketmaster, by calling the RSO office at 610-373-7557 or emailing [email protected].

Additional performances in the 2018-19 season include Scandinavian Dreams with the RSO String Quartet on October 20; beloved classical works from Debussy’s Clair de Lune to Bernstein’s Candide Overture in Orchestral Masterpieces on December 1; a celebration of 2019 with New Years Eve: The Music of James Taylor & Carole King on December 31; a performance featuring acclaimed pianist Julio Elizalde in Beethoven Piano Concerto on January 26; Lincoln Portrait: Images of Freedom, Aaron Copland’s tribute to the nation’s sixteenth president with photochoreography by Westwater Arts on March 9; the magic of cirque with aerial flyers, acrobats, contortionists, jugglers, dancers, and more, in Cirque De La Symphonie on April 13; and Puccini’s Tosca in collaboration with Berks Opera Company, the Reading Choral Society and Berks Youth Chorus on May 4.

Matthew Trusler has developed a reputation as one of Britain’s leading violinists, performing with many of the world’s great orchestras, and receiving huge critical acclaim for his diverse recordings. He has also founded the record label Orchid Classics on which some of the most important artists of today are recording, and the Lenny Trusler Children’s Foundation, which raises money for ill babies. Trusler was instrumental in forming the Malmo International String Festival, and was in 2012 was appointed a director of Delange Artists Management, based in Amsterdam.

Performing on a bow once owned by Heifetz, given to him by Herbert Axelrod (who himself received it from Heifetz), Trusler has received particular acclaim for his performances of works from the 20th century, including concertos by Walton, Berg, Britten and Lindberg. His recording of concertos by Korngold and Rozsa with the Dusseldorf Symphony received 5 stars in BBC Music Magazine, and the headline “Hotter than Heifetz?”

Trusler has been invited to perform as a recitalist and concerto soloist throughout Europe, Australia, the United States, Japan, and South Africa. In the UK, he has performed with major orchestras including the BBC Symphony, BBC Scottish and BBC Welsh orchestras, the Philharmonia, London Philharmonic, Royal Philharmonic, City of Birmingham, Halle and Academy of St. Martin-in-the-Fields. Further afield, he has appeared with the Minnesota Orchestra, NDR Hanover, Helsinki Philharmonic, Deutsche Symphony Berlin, Malaysian Philharmonic, Dusseldorf Tonhalle, Flanders Symfonieorkest and Johannesburg Philharmonic. Some of his personal highlights include his debut at the BBC Proms where he performed the Mathias Violin Concerto with the BBC National Orchestra of Wales, tours with the Australian orchestras (including appearances in Perth, Queensland and Tasmania), a tour of Germany with the Academy of St. Martin-in-the-Fields and Sir Neville Marriner, and a tour of Mexico with Martyn Brabbins and the Philharmonia.

Andrew Constantine was appointed Music Director of the Reading Symphony Orchestra in April 2007 following a two year search involving nearly three hundred conductors and was named Music Director of the Fort Wayne Philharmonic in July 2009. Previously, Constantine served as Associate Conductor of the Baltimore Symphony Orchestra for three years following an appointment by Yuri Temirkanov in 2004. Constantine works regularly with nearly all of the top British orchestras including the Royal Philharmonic and the Philharmonia Orchestra as well as having strong relationships with a number of European and Scandinavian orchestras including the St. Petersburg Philharmonic. In the United States, Constantine has developed a reputation for imaginative and compelling programming as well as a profound commitment to music education. In 2003, he was awarded the degree of Honorary Doctor of Music by the University of Leicester for his “contribution to music” and was also awarded a highly prestigious British NESTA Fellowship.

About the Reading Symphony Orchestra

Since 1913, the Reading Symphony Orchestra has been providing uninterrupted access to exceptional classical music to the citizens of Berks County and beyond. Throughout the past 105 years as one of the nation’s continuously operating symphonies, the RSO has performed masterworks from Bach to Beethoven, and many more, and has been joined by illustrious guest soloists including pianists Yuja Wang and Fabio Bidini, violinist Midori, and guitarist Jason Vieaux.