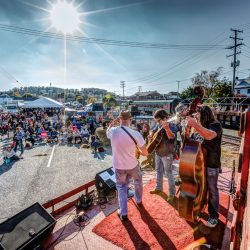 WYOMISSING, PA – Tompkins VIST Bank announced that it will be the Platinum Sponsor of Boyertown’s Pickfest Music/Art and Agricultural Crawl scheduled for October 12, 13, and 14. The sponsorship will underwrite the major costs of the three-day event.

Now in its 13th year, the festival, which originated in Frecon’s Orchards and is named for the apple harvesting season, will be held in Boyertown and surrounding areas. It will feature music, children’s activities, artisan exhibits, craft beers, cider and wine tasting and much more. More than a dozen bands including Kendal Conrad, Stephanie Grace, and Grateful Ted and Friends, will perform in indoor and outdoor venues.

“Pickfest’s reputation as a harvest celebration has grown, so when we learned of the sponsorship opportunity, we were happy to help,” said Scott Gruber, president and CEO of Tompkins VIST Bank.  Boyertown Branch Manager Lori Carnes agreed. “We’re always looking for ways to highlight our communities, and we’re excited about this chance to bring more people to Boyertown.”

Lyn Camella-Rich, one of the festival organizers and co-owner of Dancing Tree Creations Artisans Gallery & Studio was pleased with the bank’s response.  “We know Tompkins VIST Bank has a reputation for helping its communities, and we are thrilled that they agreed to be our major sponsor.”