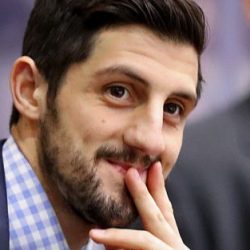 The Reading Royals, ECHL affiliate of the Philadelphia Flyers and Lehigh Valley Phantoms, have announced that Mike Marcou has been named Royals assistant coach. Marcou was a defenseman with the Royals from 2014-17 and team Captain in 2016-17. He played five professional seasons and qualified for the Kelly Cup Playoffs in each campaign. Last season, the 28-year-old was as an assistant coach with the P.A.L. Junior Islanders of the NCDC. He replaces former Royals assistant coach Patrick Wellar, who agreed to become Hershey Bears assistant coach in July. Marcou joins Royals Head Coach Kirk MacDonald on the team staff.“I’m very excited to be heading back to Reading,” Marcou said. “Reading has been my home for the past three years and I am looking forward to being back with the great fans. The fans and the organization have always treated me well and I’m very eager to continue the journey with the team.”“We are thrilled to welcome back Mike to the Royals,” MacDonald said. “During his time playing in Reading, he demonstrated the type of leadership that will make him a successful professional coach. He will be a tremendous asset to our staff.”Over three seasonspatrolling Reading’s blue line, Marcou recorded 66 points, the fifth-most by a Royals defenseman in team history. He registered a career-high 35 points (6g) with the team in 2014-15. After starting the next season in Austria with the Graz 99ers, Marcou returned to the Flyers organization in Dec. 2015 and scored 19 points (4g) for Reading in 47 games.He played in 14 Kelly Cup Playoff games in 2016 and Reading qualified for the Eastern Conference Semifinals. During his final professional season, the native of Kings Park, NY notched 12 points (2g) in 27 games before finishing the season with the Florida Everblades. In 272 ECHL games, Marcou put up 26 goals, 124 points and 93 PIM.Marcou led the defensemen on his team in scoring three times (2012-13, 2013-14, 2014-15). He spent the first two seasons of his career with Greenville and competed in six career AHL games.In 2012-13, his rookie season, Marcou topped Greenville blue liners with 25 points (6g) in 54 games and was selected to represent the Road Warriors at the 2013 ECHL All-Star Classic.Prior to turning pro, Marcou played four seasons at the UMass-Amherst (2008-12). He was the team’s alternate captain in his junior and senior seasons. In his sophomore campaign, he was selected as the team’s co-Most Improved Player. In 117 collegiate games, Marcou recorded 43 points (17g) and 77 penalty minutes.Season tickets and mini-plans are on sale by calling 610-898-7825 (PUCK).First Home Game Oct. 13The Royals will open the 2018-19 regular season at Santander Arena on Sat., Oct. 13 at 7:00 p.m. vs. the Worcester Railers. The home opener will feature a special Block Party and “Red Carpet” presentation for the team.