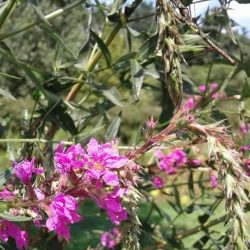 We’ll go to any lengths to pull invasive plants… including taking to the water!

It was a hot one last week when our summer intern, Lauren, set off in a kayak in the pond behind our Nature Preschool. She wasn’t taking a leisurely lunchtime float. Rather, she was helping us to rid the park of a patch of purple loosestrife- an aggressive and unwelcome invader that replaces valuable wetland plants and eliminates food and shelter for wildlife.

Berks Nature is taking great lengths to manage purple loosestrife, and has greatly reduced its footprint in Angelica Park. Still, “because invasive species have no checks or balances, it’ll take full advantage of any opportunity that comes its way. So it even showed up on our bio island, sitting in the middle of our retention pond,” Berks Nature Senior Ecologist Larry Lloyd explained.

“If you’re an invasive species and you’re prevalent, you’re taking the space of a native plant that supports the local food webs,” Larry continued. “So the insects that would go on the native plants may not be able to adapt, and then the loosestrife will favor other invasive species.”

One unwelcome species that’s been spotted on purple loosestrife? The spotted lanternfly. “What it begins to do is create different food webs that don’t support the function of your local endemic wetlands,” Larry said.

Thanks to Lauren and our land protection specialist, Sarah, our bio island is free yet again from purple loosestrife!

A little about purple loosestrife…

Where did it originate? This beautiful but aggressive plant arrived in eastern North America in the early 1800s, brought as a seed by settlers for their flower gardens, and in the ballast holds of European ships to weigh down the vessels for stability on the ocean. Since being introduced, it’s spread west, and can be found across much of the US and Canada.

How does it affect wetlands? As the most biologically diverse, productive component of our ecosystem, wetlands are home to hundreds of species of plants, birds, mammals, reptiles, insects, fish and amphibians- all of whom rely on a healthy wetland habitat to feed, seek shelter, reproduce and rear young. When purple loosestrife gets a hold, however, this habitat gets choked under a sea of purple flowers.

When should you look for it? Purple loosestrife is in bloom and easily recognized between July and August.

How does it spread? In one year, a mature purple loosestrife plant can produce over 1 million seeds- each being about the size of ground pepper. These seeds are carried by water and wind, and on the feathers and fur of birds and mammals. Additionally, humans can serve as a vehicle for the seeds- carring them on muddy shoes, on boats, boat trailers and on vehicles.

Don’t plant purple loosestrife. Even Lythrum varieties advertised not to make seeds can cross-breed with the invading loosestrife to make seeds.Be on the lookout for pioneering plants or isolated small colonies, especially in areas otherwise free of loosestrife. Remove pioneer plants immediately.Rinse off equipment, gear, clothing and footwear used in infested areas before moving into uninfested areas.Cut off flower heads, bag and destroy them. Repeat throughout the flowering season (late June – early September). This will prevent millions of seeds from ripening and spreading.(Sources: Penn State Extension, The University of Minnesota)