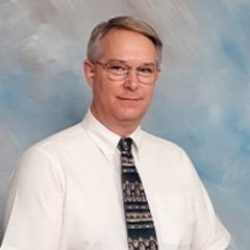 Dr. David L. Sanford, associate professor of ornamental horticulture at Penn State Berks, was recognized with the Perennial Plant Association’s Academic Award of Excellence on July 31, 2018, at their annual symposium held in Raleigh, NC. This award recognizes an individual with outstanding talents and abilities who provides exceptional leadership in education for the perennial plant industry.

Sanford has been a member of the faculty at Penn State Berks for 29 years. Among his accomplishments, he was instrumental in the building of a campus greenhouse in 1990 and he continues to oversee the care and maintenance of the facility, as well as an arboretum of tree, shrub and herbaceous plantings which bring him to the campus on a daily basis including weekends, holidays, and during summer breaks.

The greenhouse, which was built to provide horticulture and agriculture students with hands-on experience in plant propagation and crop growth, remains the teaching site for numerous courses. Student groups, such as the Agriculture and Environmental Club, also use the greenhouse as a resource to benefit the campus. Various crops and flowers are grown throughout the year for sale and display, adding to the beauty of the campus and generating proceeds to assist in the greenhouse operation.

In addition to teaching, he holds an appointment with Penn State Cooperative Extension as a specialist in ornamental horticulture where he speaks and conducts workshops for the green industry in southeastern Pennsylvania. His programs on various horticultural topics are popular with both professionals in the industry as well as the general public. He has been credited with more than 24 publications and has made more than 500 presentations since joining Penn State. He received both the Penn State Berks Outstanding Advising Award in 2008 and the Outstanding Service Award in 1993 and 2008.

Sanford’s involvement in the green industry is extensive. He was named a Fellow of the Eastern Region of the International Plant Propagators’ Society (IPPS) in 2008. This award recognizes his outstanding contributions to the Society and to the field of plant propagation through research, teaching, extension and leadership.

He has served on the Board of Directors of the Perennial Plant Association for 10 years and as past president and treasurer of the organization. He has also been awarded the Pennsylvania Landscape and Nursery Association Exceptional Leadership Award for 2008. At the community level, he is one of the original organizers of the Berks County Home Gardener’s School and is also active with the Pennsylvania Landscape Nursery Association, where he has hosted and assisted in coordinating the Certified Landscape Technician Exam at the Berks campus.

“I’m doing what I always wanted to do,” summarizes Sanford. “I feel very fortunate.”

The Perennial Plant Association is a trade association composed of growers, retailers, landscape designers and contractors, educators, and others that are professionally involved in the herbaceous perennial industry.