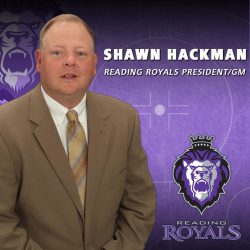 Originally from Saylorsburg, PA, Hackman is a Penn State Graduate who has had two prominent experiences working in hockey. In 2014-15, the Phoenix Coyotes placed him as an on-site corporate sponsorship and business development leader while Hackman served as a vice president at Front Row Marketing. In 2009-10, the Quad City Mallards were named IHL Franchise of the Year when Hackman was the team’s Executive Vice President, General Manager and Alternate Governor.

“We are excited to have Shawn join the Royals family,” said Royals Owner Mr. Jack Gulati. “Shawn has shown a clear expertise in leading hockey teams and sports organizations throughout his career and this made him the perfect candidate for the position. His wealth of business skills will be essential in helping us fill Santander Arena and keeping Royals games fun and family-friendly.”

“I am thrilled to join the Royals and look forward to enhancing the strong bond the team has with the community,” Hackman said. “Reading is steeped in hockey tradition and I am honored to be a part of leading this team. I would like to thank Mr. Gulati and Royals CFO John Long for giving me the opportunity. We are excited to see everyone at our home opener on October 13.”

Hackman has a well-rounded background in sports business operations, serving as Chief Revenue Officer of IRG Sports & Entertainment in 2016-17, Senior Director of Business Development for the Kentucky Speedway (2015-16) and Vice President of Motorsports for Front Row Marketing Services from 2012-15. Among notable successes at Front Row Marketing, Hackman steered the Phoenix Coyotes’ corporate sponsorship team to develop new partnerships with companies that had never worked in sports or entertainment.

He lives in Pen Argyl, PA with his wife, Lisa, and son, Luke.

The Royals will host an Open House for all fans on Sat., Sept. 8 from 9:00 a.m. – 4:00 p.m., the perfect chance to select your seats for the 2018-19 campaign. The Lion’s Den Team Store will have a 50% off clearance sale and any fan that refers another fan who purchases tickets will receive a team store gift card. Come by to learn about Royals ticket packages, select a seat for the spot you’ve been considering and reserve your group night.

The Royals will open the 2018-19 regular season at Santander Arena on Sat., Oct. 13 at 7:00 p.m. vs. the Worcester Railers. The home opener will feature a special Block Party and “Red Carpet” presentation for the team.