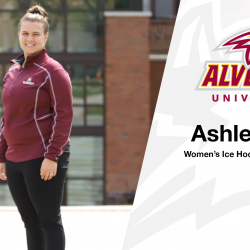 “Ashley is one of the best to ever play the D3 women’s game,” said Brandwene. “On top of that, she is an even better person and leader. She will be a great mentor and teacher for the Alvernia women’s players, and I am grateful to have her as a partner to build this program.”

Prior to her work with Northeastern University, Ryan had a standout playing career with Elmira College. Ryan was a member of Elmira’s 2013 Division III National Championship team, and is a two-time first team All-American. During her senior season, Ryan tallied 61 points in 30 games, earning her the Laura Hurd Award for the top player in Division III women’s ice hockey. In that same season, Ryan broke Elmira’s single-season assist record with 42 assists, and tied the NCAA Division III mark for most assists in a season. Ryan is also a two-time member of the NCAA Division III All-Tournament team, and a four year all-academic honoree.

“I am very excited to be working alongside Coach Brandwene to build this program into something special,” said Ryan. “I look forward to putting in the hard work to make that possible. I am honored to have this opportunity with Alvernia University.”

Alvernia Women’s Ice Hockey is Alvernia’s 27th varsity sport, and will compete in the Middle Atlantic Conference (MAC). The Golden Wolves will practice and compete at The Body Zone and Santander Arena. Competition is set to begin in the fall of 2019.