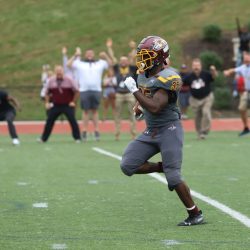 (Sept. 1, 2018) – Alvernia University (1-0) needed a defensive stop on 4th and goal from the 2 to seal a 26-21 win over Gallaudet University (0-1) Saturday afternoon in the first ever football game for the Golden Wolves.

Gallaudet had four plays from inside the Alvernia 5 on its final drive, but the Golden Wolves’ defense stood strong to close out the win.”I made the call and just had to believe,” said Alvernia head coach Ralph Clark of the final play.​​​​​​​Gallaudet quarterback Timel Benton faked the dive to DeMichael Shelbon, and rolled right with slotback Cassmeir Hutchinson.  Keyon Lowery tripped up Benton who pitched to Hutchinson, and cornerback Josh Donaldson wrapped up the tackle to seal the win.Malcolm Carey scored the winning touchdown on a 20-yard rush with 2:40 to go.  He finished with a game-high 117 yards on 13 rushes and two touchdowns. Jake Dilcher was 15-for-19 for 127 yards and a touchdown.”It’s unreal right now,” said Carey.  “We won it for Coach Clark. He’s a great coach and a great man.  We just wanted to get him this win and get the season started of right.”​​​​​​​Alvernia took the opening kickoff and moved the ball well on its first drive–including a 14-yard run from Dilcher–but ended up punting from near midfield.The Bison opened the scoring later in the first on a 1-yard plunge from Shelbon that finished off a 10-play, 68-yard drive, and took a 14-0 lead on the first drive of the second quarter.Benton moved the chains with a 13-yard pass to start the drive, and the Bison pounded the ball on the ground covering the final 26 yards on eight rushes with Shelbon punching in his second of the game from short yardage.​​​​​​​Alvernia’s no-huddle offense finally found a spark in the second quarter.  A 21-yard pass play to Neeko Scurlock moved the ball to the Gallaudet 38, then Dilcher hit Scurlock for eight.  Back to back rushes from Ja’Queces Mathis had the ball inside the 20, and a 13-yard quarterback keeper from Marlon Brown on 4th and two from the 16 made it first and goal.  Brown kept it again on the next play and surged into the end zone to claim the first touchdown in Alvernia history.After a Bison 3-and-out, Alvernia took over near midfield.  The running game moved the ball 32 yards down to the 15 where Dilcher connected with sophomore Brian Tanis on a slant for another score.”We were looking into the play going into the drive,” said Tanis.  “We saw what the defense was giving us and Coach Lowrey had to give us the call again and I was just ready for it.  I knew it was going to come my way and I was ready for it.”The Wolves weren’t able to convert either of the first two extra points and trailed 14-12 at halftime.​​​​​​​Alvernia recovered a fumble on the second play in the third quarter and turned it into points with Carey scoring on his first of two 20-yard runs.  Brown was in for the conversion and pushed that across for a 20-14 lead–the first ever for the Golden Wolves.​​​​​​​Gallaudet answered immediately with Shelbon racking up 26 yards on the ground during a 50-yard drive that ended with Benton’s 12-yard run and a 21-20 Gallaudet lead.The score remained the same well into the fourth quarter before Alvernia forced a punt with 4:53 to play and took over at its own 40.​​​​​​​Dalen Berry jump started the drive with a 17-yard run, and a heads up play from Dilcher to quick snap on 3rd and four at the 37 caught Gallaudet with two many men on the field.  Berry went for six then Tanis for six more to set up Carey’s game winner.”It felt great,” said Carey of the win  “It’s like a story, like a movie story right now.””It’s amazing,” said Tanis, “to see a bunch of people come out for the first game. I hope to see them for the rest of the season like this.””It’s validation,” said Clark of a win in his first game as a head coach.  “I told everyone from the interview process to today that this was possible, but here’s the deal.  This isn’t the end, this is the beginning. This is one win. This is a long road. This one game doesn’t make a season.  We’ve got a lot of work to do. We’ve got a lot of improving to do, but this helps. This helps.”​​​​​​​Alvernia gets some addition time to work for game two with a bye week next Saturday.  The Golden Wolves host FDU-Florham for their first Middle Atlantic Conference game on September 15.