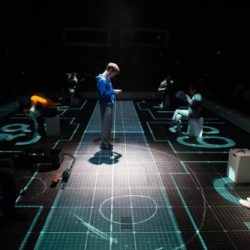 Experience the best of British theatre on the big screen

“The National Theatre is one of the best theatre companies in the world, and we are delighted to show their finest plays straight from London, recorded for film, so our patrons have the best seat in the house,” said Don Fox, President of Fox Theatres.

All productions will be shown on Wednesday nights at 6 p.m. For more information on the following shows and to purchase tickets, visit www.foxshowtimes.com/events:

Winner of the Tony Award for Best Play and 7 Olivier Awards, The Curious Incident of the Dog in the Night-Time tells the story of an autistic boy who embarks on a frightening adventure that upturns his world.

Childlike in his innocence but grotesque in form, Frankenstein’s bewildered creature is cast out into a hostile universe by his horror-struck maker. Scientific responsibility, parental neglect, cognitive development and the nature of good and evil, are embedded within this thrilling and deeply disturbing classic tale.

Ruthlessly fighting to survive, the Macbeths are propelled towards the crown by forces of elemental darkness in Shakespeare’s classic tragedy, set in the ruined aftermath of a bloody civil war.

Ralph Fiennes and Sophie Okonedo play Shakespeare’s famous couple in his great tragedy of politics, passion and power. At the fringes of the war-torn Roman Empire, Queen Cleopatra and Mark Antony have fallen fiercely in love. In a tragic fight between devotion and duty, obsession becomes a catalyst for war.

In this multi-award-winning drama, it’s 1786 and King George III is the most powerful man in the world. But as his mind is unravelling at a dramatic pace, ambitious politicians threaten to undermine his power and expose the fine line between a King and a man.

Considered by many to be the greatest tragedy ever written, King Lear sees two ageing fathers – one a King, one his courtier – reject the children who truly love them. Their blindness unleashes a tornado of pitiless ambition and treachery, as family and state are plunged into a violent power struggle with bitter ends. Stars Sir Ian McKellen.