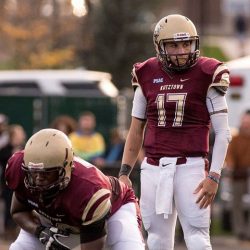 DiGalbo led KU to its first win over Cal (PA) since 1997, completing his first 15 passes of the game and finishing 20-for-26 with 256 yards through the air. On the ground, he proved equally as effective, totaling a career-high 133 yards and two touchdowns, including a 52-yard touchdown scamper on Kutztown’s first drive of the third quarter. The 133 rushing yards for DiGalbo are the most-ever by a Golden Bear quarterback, breaking his own school-record set in 2016.

He has now rushed for two touchdowns in each of the Golden Bears’ two games this season, improving his career total to 16, second-most by a quarterback at KU. DiGalbo ranks second in the PSAC behind backfield-mate Craig Reynolds with four rushing touchdowns on the season. DiGalbo and Reynolds make up a potent rushing attack for head coach Jim Clements, which ranks second in the PSAC in rushing at 195.5 yards per game. Through the air, the Mongsignor Bonner-prep has passed for 554 yards with one touchdown and no interceptions in the first two games, posting a 165.7 QBR, third in the PSAC.

DiGalbo and the Maroon and Gold will look to make it 3-0 this weekend, traveling to Gannon University for a tough matchup with the Golden Knights. Slated for a noon kickoff on Saturday, Sept. 15, live stats and video will be available on the PSAC Network, which can be accessed via www.kubears.com.