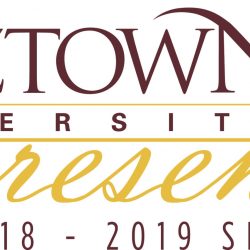 Kutztown, PA – KU Presents! opens its 30th anniversary season at Kutztown University’s Schaeffer Auditorium with the Tony® Award-winning musical Million Dollar Quartet.  On December 4, 1956, a twist of fate brought together Johnny Cash, Jerry Lee Lewis, Carl Perkins and Elvis Presley.  On that day, Carl Perkins booked a recording session with producer Sam Phillips at Sun Records.  Along with Jerry Lee Lewis, Perkins and his band recorded a number of songs. While many of the details of the rest of the day’s events are still in dispute, this much is known: Perkins and Lewis were later joined by Elvis Presley and Johnny Cash, and they held an impromptu jam session.

The recording session retains its historical significance as a landmark event in the age of Rock n’ Roll and a milestone for the genre in the ever-changing world of 20th century popular culture and mass media.  Million Dollar Quartet captures the contagious spirit, freewheeling excitement and thrilling sounds of the once-in-a-life-time event where four of music’s best talents came together.

Million Dollar Quartet will take the stage at 7:30 p.m. on Tuesday, September 18 in Schaeffer Auditorium on the Kutztown University campus.  Come early for a 30th anniversary celebration at 6:30 pm on the Marcon Platz between Schaeffer Auditorium and the Sharadin Art Building. Tickets are $45; $40 for students and seniors and can be purchased at www.KutztownPresents.org, or by calling the KU Presents! Box Office Tuesday – Friday 11:00am – 4:00pm at 610-683-4092.  Established to be the center of cultural life at Kutztown University, KU Presents! serves the campus and community by bringing world-class live arts that can entertain, educate and enrich.