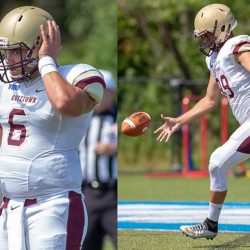 KUTZTOWN, Pa. – The undefeated-Kutztown University football program was honored by the Pennsylvania State Athletic Conference (PSAC) on Monday as quarterback Eric Nickel  and punter Dean Krcic  were selected as the PSAC Eastern Division’s Offensive and Special Teams Athletes of the Week, respectively, following their performance in KU’s come-from-behind, 48-33 win at Gannon on Sept.15.

KU has notched comeback wins in each of its three games this season and its 3-0 start is its best since 2011. Kutztown used 26 unanswered fourth-quarter points to finish off Gannon with Nickel’s arm and Krcic’s leg as instrumental pieces in the win.

In his first career start, Nickel led the KU offense to the tune of nearly 400 yards and six touchdowns in the road victory. The redshirt-sophomore completed 28-of-40 passes for 394 yards, totaling five passing touchdowns and one rushing touchdown. He is the ninth player in school history to throw for five touchdowns in a game. Nickel completed passes to an astounding 12 receivers, as Kutztown posted a season-high 579 yards of offense.

Notably, Nickel’s award is the third Offensive Athlete of the Week award won by a different KU quarterback in the last four weeks of competition with Collin DiGalbo winning on Sept. 10, 2018 and Chris Kane  receiving the honor on Nov. 11, 2017.

Krcic’s booming leg was on display despite the offensive shootout as he was able to flip the field position all afternoon and pin the Golden Knights deep in their own territory. Krcic connected on three 50+ yard punts, which included a long of 62 yards, for an average of 46.3 yards per punt on his six attempts. Three of his attempts were downed inside the 20-yardline with his first punt of the game sailing out-of-bounds at the GU 1-yardline.

The unblemished Golden Bears will enjoy their bye week before welcoming Bloomsburg University for their PSAC Eastern Division opener on Saturday, Sept. 29.