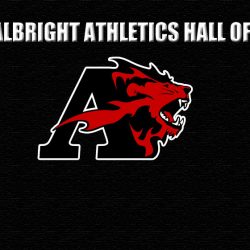 A total of four inductees will make up the Albright College Athletics Hall of Fame Class of 2018. The honorees will be inducted into the Hall of Fame on Friday, Sept. 28, during ceremonies at Albright’s Schumo Center.

The accolades among the group are highlighted by conference championship winners (Kroh, Stratz), a 1,000 point scorer (Buchanon), and an All-America selection (Stratz).

Terron Buchanon ’04 was a member of the Albright men’s basketball team. He started off his Albright career with a bang in his freshman season by garnering a spot on the 2001 DIII News All-Freshman team, and being named 2001 MAC Commonwealth Rookie of the Year. He followed that up by being named to the All-MAC Commonwealth Second Team in 2002 and 2003 before earning First-Team honors in his senior year of 2004. Buchanon finished his career by being named to the NABC All-District Second Team in his senior year as well. He is a member of the 1,000 point club with 1,560 total points, and currently ranks 11th in Albright men’s basketball all-time scoring.

Following his graduation from Albright, Buchanon became a Pennsylvania State Trooper and has served for the past 12 years.

David Miller ’98 was one of the more decorated baseball players in Albright history. He started all four years as catcher, and earned NCAA Division III ABCA All-Star Team honors in his senior season of 1998.

Miller holds the Albright program record for career RBIs and helped lead the Lions to two MAC Commonwealth regular season titles in 1996 and 1998. He earned All-MAC honors in all four years at Albright with first-team selections coming in 1997 and 1998, and second-team selections coming in at 1995 and 1996. In addition to all of those accolades, Miller was named Co-Team MVP in 1998. Miller received his J.D. from Villanova University following his graduation at Albright, and serves as an attorney at Michael J. O’Connors & Associates.

Shawn Stratz ’99 made his mark on Albright athletics as a member of the football team. As a defensive lineman, Stratz earned Division III All-American honorable mention in 1996 before being named a Division III Preseason All-American by Don Hansen’s Football Gazette.

Stratz became a stalwart in the Lions defense by helping lead the team to back-to-back MAC Championships in 1996 and 1997. The 1996 team would also advance to the quarterfinals of the NCAA Tournament as well. Stratz was named to the Don Hansen’s Football Gazette DIII All-Region Second Team in 1996 in addition to garnering All-MAC First Team honors in 1995 and 1996. He also was named to the All-MAC Second Team and the All-ECAC Metro Second Team after the 1997 season.

Stratz earned his Master’s in Education at Cabrini following his time at Albright, while continuing his involvement in football as he serves as the defensive coordinator for St. Joseph’s Preparatory School in Philadelphia. He also serves as the Dean of Students at Willard Elementary in Philadelphia as well.

Kroh ranks in the Albright women’s swimming program top 10 for five different events and was also named the Albright Outstanding Female Freshman of the Year in 2000. Following her graduation at Albright, Kroh served as a therapeutic support staff member at Southwestern Human Services.

The evening will begin with a reception at 6 p.m. and dinner will follow at 7 p.m. Following dinner, the honorees will be inducted into the Albright Hall of Fame. The four will also be recognized at halftime of the Albright Homecoming game against FDU-Florham on Saturday, Sept. 29.