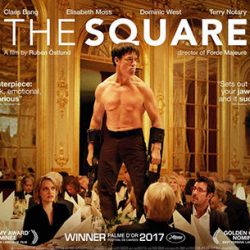 This fall, as part of the Global Studies degree program’s “Global Oscars Comes to Berks,” Penn State Berks will present their second film, “The Square,” at 6 p.m. Tuesday, October 9, in room 5 of the Luerssen Building. The event is free and open to the public.

“The Square” is a 2017 Swedish satirical drama film, and it was nominated for the Academy Award for Best Foreign Language Film at the 90th Academy Awards. Christian is a prestigious Stockholm museum’s chief art curator, who finds himself in times of both professional and personal crisis as he attempts to set up a controversial new exhibit. The exhibit, called “The Square,” invites passersby to altruism, reminding them of their role as responsible fellow human beings. When Christian’s phone is stolen, it leads him into shameful situations, and when a publicity stunt for the exhibit goes awry, the response is overblown and sends Christian, as well as the museum, into an existential crisis.

Future films in the Global Oscars series include “The Insult” on Nov. 6, and “Loveless” on Dec. 4.