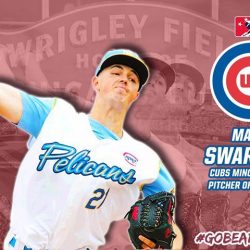 Kutztown University baseball alumnus Matt Swarmer has been named the Minor League Pitcher of the Year by the Chicago Cubs.

Swarmer, a 2016 KU graduate, was drafted by the Cubs in the 19th round following his senior season and has seen his career on the upswing ever since. Between Single-A Myrtle Beach and Double-A Tennessee, Swarmer posted nine wins in 24 starts, holding a 3.22 ERA in 128.2 innings. The Mohnton-native struck out 135 batters and had just 21 walks, notching a 6.43 strikeout-to-walk ratio.

While donning the Maroon and Gold, the Governor Mifflin-prep made 63 appearances for KU (t-fourth all-time), starting 20 total games from 2013-16. Swarmer was head coach Chris Blum‘s main option out of the bullpen during the 2014 season, collecting 10 saves, which ranks second for saves in a season in school history.

Swarmer will be honored during an on-field ceremony prior to the Cubs 7:05 p.m. CT game Thursday, Sept. 27, against the Pittsburgh Pirates at Wrigley Field.