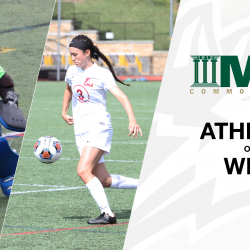 Lebanon, Pa (Sept. 24) – Senior Nicole Heinze and Junior Alison Hyde were named MAC Commonwealth Players of the Week for their performance from Sept. 17 – Sept. 23, 2018, as announced by the MAC Office.

Heinze had a great week in net for Alvernia, making seven saves on 12 shots faced in a 2-0 week. Heinze opened the week with four saves during a 1-0 shutout over Stockton University. The senior capped off the week with three saves on eight shots in a 2-1 win over Stevenson University in the MAC Commonwealth opener.

Hyde scored three of the four Golden Wolves goals in a 1-1 week for Alvernia. Hyde scored both goals, including the game-winning goal, in a 2-1 win over Immaculata University. The junior then scored the first goal for Alvernia in a 4-2 setback to Cabrini. Hyde had a streak of five-straight goals for Alvernia after opening the game with a goal against Cabrini. Hyde is the second straight Alvernia Women’s Soccer player to earn MAC Commonwealth Offensive Player of the Week. Sophomore Kyla Gibson earned the honor for Alvernia last week.