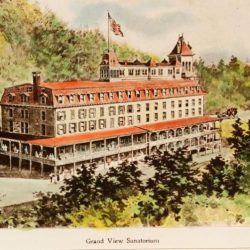 This article originally appeared in the Spring 1962 issue of The Historical Review of Berks County.

Nestled against the slopes of South Mountain, a few miles due west of Reading, there are many imposing structures dotting the green of the forests and glades of the elevations that rim the Lebanon Valley.

To the stranger who motors along Route 422 these buildings may resemble the ruins of medieval castles. Even now, and in this new world which has no castles, these edifices bespeak the grandeur of an earlier day. But it was not the glory of feudal might that these elaborate structures proclaimed. Their nobleness was in their dedication to the restoration of health for those who suffered pain and their splendor reflected the high purposes of the men of medicine who built them.

One hundred years ago medicine was not the exact science that it is today. Progress in any field of study must evolve through theory and experiment. During the second half of the 19th Century there were many persons who believed that cures for certain maladies could be found in Nature’s larger sphere of climate, fresh air, pure water, exercise, and baths of various kinds. For such practitioners, the chief reliance could not be placed in processed forms of nature such as pills, injections, and other materials of modern medicine. This should not be interpreted to mean that there was no knowledge of medicine or that modern treatments scoff at the efforts of the earlier practitioners. The change we know today is a matter of the degree of emphasis. With the advancement of laboratory science and medical research the “water cures” or hydropathy became less significant in treatment for disorders; and the elaborate buildings, near water-spas and on mountain tops, fell into disuse for such purposes.

Most of the health resorts, known as sanatoriums were located in that segment of South Mountain which lies within what is now South Heidelberg Township, Berks County. Wernersville was then, as now, the nearest community that had the advantage of frequent passenger railway service and, in earlier days, rail transportation was the chief means of travel between distant points. From the first year of the opening of the Wernersville Station of the Lebanon Valley branch of the Reading Railroad (1857) until the automobile came into general use, all patients, guests and freight destined for the South Mountain resorts arrived at the Wernersville station. Several hundred guests, arriving or leaving on any train, was a common sight.

Old-timers remember that Rear-Admiral Edwin Longenecker, a resident of Wernersville after his retirement (1912) from 45 years of service in the U. S. Navy, was the unofficial welcomer to strangers as they emerged from the coaches of the trains and then hurried to waiting carriages which were parked near the station to take them to the resorts of their choice. The cost of a trip by horse-drawn carriages from Wernersville to the mountain was twenty-five cents per person. The carriages could accommodate from four to twenty passengers.

These resorts were known by various names during the three quarters of a century in which they operated.

Click here to continue reading a brief history for each of the major establishments.