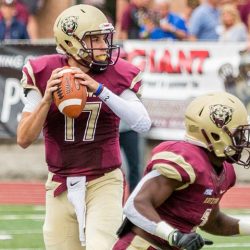 DiGalbo helped guide the Golden Bears (5-0 overall, 2-0 PSAC East Division) to a 35-33 win on Saturday, Oct. 6 at East Stroudsburg University. He threw for season-highs with four touchdowns and 344 yards, going 26-for-39.

In total, the Kutztown offense rolled up 547 total yards, rushing and passing for over 200 yards for the third time this season. 10 different Golden Bears caught passes in the game, making it three straight games that KU has had double-digit pass-catchers. KU is second in the PSAC in scoring at 38.6 points per game.

It is the second time this season that DiGalbo received the accolade and the fifth week that a KU player has been tabbed Athlete of the Week. Craig Reynolds was voted AOW after weeks one and four of KU’s regular season, DiGalbo achieved it week two followed by Eric Nickel week three and Luke Snyder week four, joining Reynolds.