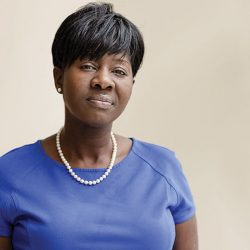 The Rex Crawley Service Award is named after Dr. Rex Crawley, a professor from Robert Morris University who was deeply involved in social advocacy, social justice and his community. The award recognizes the contributions made by an active member of the National Communication Association who completes extraordinary works of service. The association defines service as social advocacy, community service and/or mentoring.

Morant Williams was nominated for this award by two colleagues: one from the California State University, Fresno and another from Rider University in New Jersey. The award is based on the work she has done as part of a collaborative effort between Penn State Berks and Penn State Health St. Joseph, as well as other service initiatives that she has completed with her students in the community.

According to Morant Williams, “It’s always been important to me to find a clear way to link my teaching, my service, and my research. To really be able to see it materialize is very important to me.”

While this will be the 104th anniversary for the National Communication Association, it will also be the 50th anniversary for the Black Caucus, which means a lot of time will be spent looking back at what African American scholars have done and what they have contributed to the discipline in regards to research, teaching, and service. To Morant Williams, this makes receiving the award even more special.