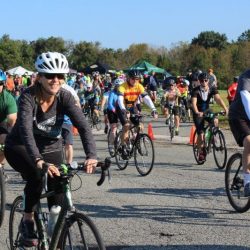 The sun-filled fall day on Sept. 29 did not go to waste for the 300 bicyclists that spent it outdoors on the Schuylkill River Trail as part of the 3rd Annual Ride for the River.

Ride for the River not only highlights the trail and river but it’s also a fundraiser for the trail. Sly Fox has partnered with Schuylkill River Greenways for the past three years by producing SRT Ale, an ale that benefits the Schuylkill River Trail. During the music festival, Sly Fox presented representatives of the Schuylkill River Greenways National Heritage Area with a check of $5,630 from the sales of this year’s SRT Ale. The ale has been a seasonal offering but attendees of Saturday’s music festival were the first to find out SRT Ale will now be available all year long. CLICK HERE, to find out more about SRT Ale.

Schuylkill River Greenways thanks the many sponsors and more than 60 volunteers who helped make this event a success.